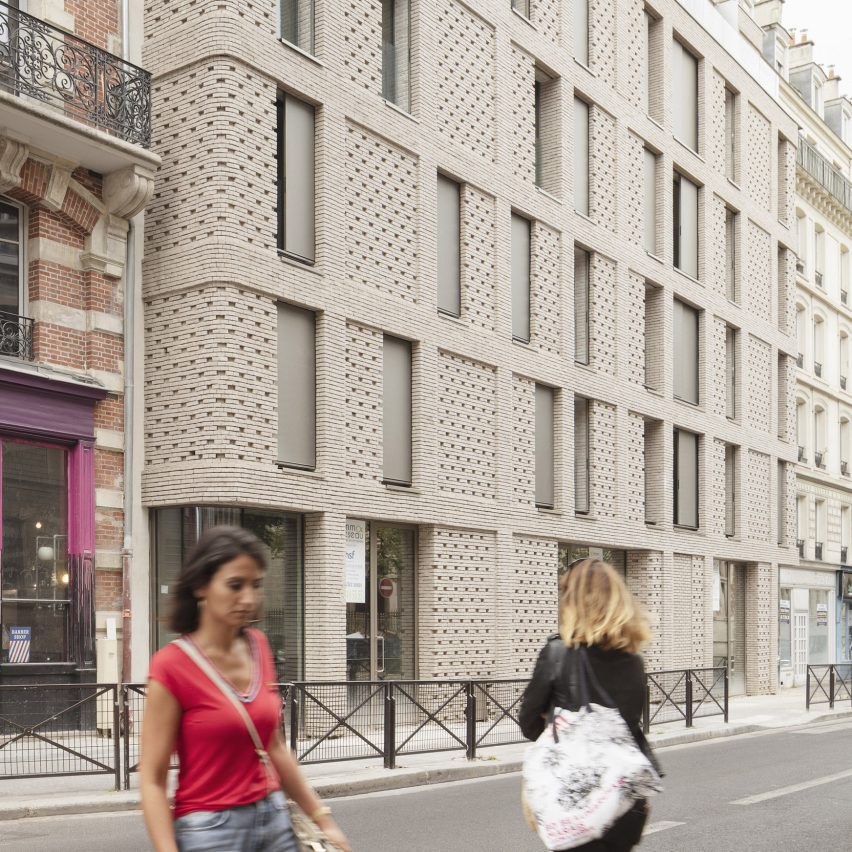 French practice Avenier Cornejo Architectes has completed a social housing block in Paris with a brickwork facade with a pattern of blue glass bricks.

The rustic facade is in reference to its Haussmann-era and art deco style neighbours.

The blue glazed bricks used to decorate the facade are arranged in a diamond pattern reminiscent of a patter on the facade of the neighbouring building.

On the southern elevation, certain bricks have been swapped for translucent glass blocks, creating a dappled pattern of light in the interiors.x

In contrast, the contrasting south elevation is clad with metal panels and perforated shutters.

Residents can use the shutters to shade their apartments or open them up to external spaces.

Located on the Rue de Charenton, one of the oldest and longest streets in Paris, the housing block provides 22 new apartments and two ground-floor retail units.

The building is organised in a U-shape around a communal garden at its rear.

“The project is a delicate balance between interior and exterior, private and collective spaces, contemporary expression and continuity with Paris’ historic architecture,” said Avenier Cornejo Architectes.

On the ground floor, a glazed entrance into the lobby provides a view directly through the building and out to the courtyard at the rear.

Either side of the entrance a bin store and bike parking area provide a buffer between the residential entrance and the two retail units at the site’s edges.

At the centre, a staircase and lift leads up to each apartment level.

Bedrooms have been arranged to maximise natural light and ensure that each is provided with its own outdoor space.

“All apartment typologies have been studied to improve architectural, spatial and environmental qualities and overcome the constraints of the context – urban rules, limited views,” explained the studio.

Sliding doors in the apartments allowing for areas to be easily divided.

Communal corridors and the lift core have been distinguished with terrazzo finishes.

Avenier Cornejo Architectes was founded by Christelle Avenier and Miguel Cornejo, and the firm’s previous projects include a home in Orsay clad entirely in cedar strips.