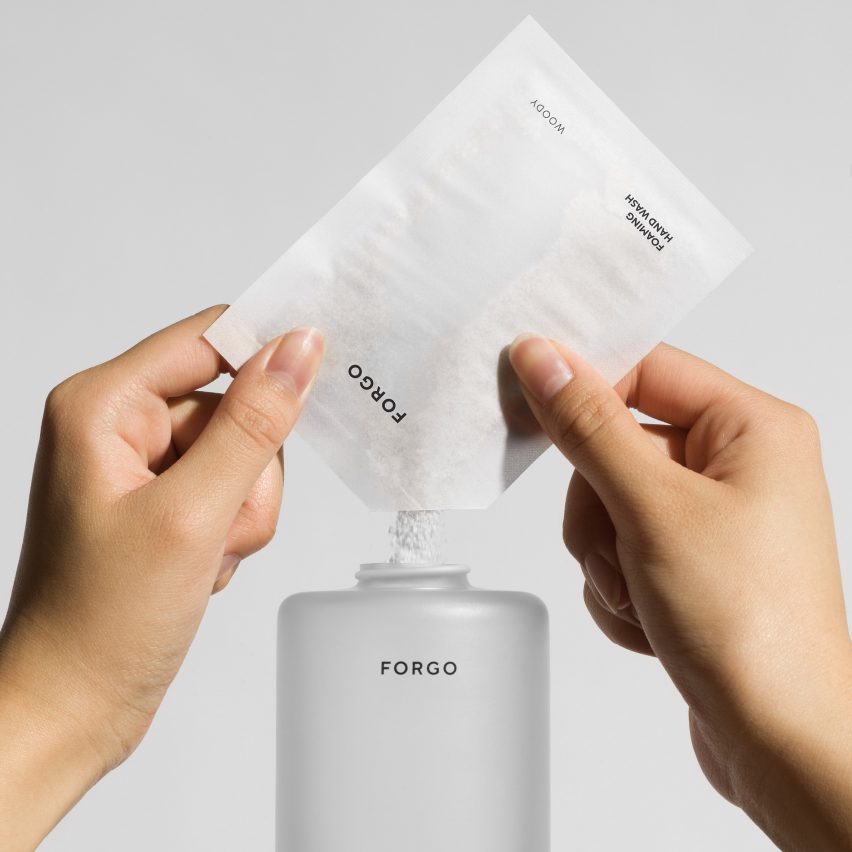 Swedish design studio Form Us With Love has used Stockholm Design Week as a platform to unveiled its first foray into cosmetics with a concentrated powder that is mixed with tap water to make soap.

This drastically cuts down the amount of plastic needed to package and saves the emissions produced by shipping larger, heavier containers.

The product is the first release from a dedicated, newly-launched brand called Forgo. It comes with a simple glass bottle alongside the re-fill sachets.

“The personal care industry is extremely wasteful,” said Allon Libermann, design manager at Form Us With Love, and co-founder of Forgo.

“We asked ourselves: is it really that hard to make something better? And the answer to that was: not really.”

Drawing on the expertise of a lab specialised in natural cosmetics, the team realised that the six core ingredients that make up the product are already readily available in concentrated powder form.

So far, cosmetics companies have simply been mixing them with their different liquid components in-house and packaging them up for consumers.

“The ingredients are quite standard, they have been around since the 80s,” Libermann told Dezeen.

“We haven’t actually innovated at all. The only, deceptively simple idea we introduced is: what if you just add the water at home?”

The process of mixing the product takes less than a minute, as a sachet is emptied into the bottle, which is filled with hot tap water and shaken thoroughly.

At this point, the mixture is a liquid, but a fine mesh filter in the pump aerates it into a user-friendly foam.

These are distilled from post-industrial waste materials, specially wood offcuts from timber yards in Canada and the unused pulp and peel from organic juicing plants in the Caribbean.

Much like the the packets that hold an individual sugar serving, the sachets are made of paper.

“But sugar sachets are actually coated with plastic, so when you throw those out they’re very hard to recycle,” explained Libermann.

“It took us ages to find this one company, who are the only ones making a water-soluble, compostable paper coating. It’s kind of like ink, so when the packaging gets recycled, the coating dissolves just through water, heat and friction.”

In an effort to keep transport-related CO2 emissions to a minimum, the team behind Forgo set out to source all the individual elements in Europe and North America.

The paper for the sachets comes from the company in the UK, the glass bottle is made in Portugal and the ingredients are ultimately assembled in Canada.

“Unfortunately in the end, we had to make some compromises as most of the actual ingredients that go into the soap are tropical,” said Libermann. “But we’re working on creating a non-tropical version.”

“The pumps, which are the only plastic component, unfortunately come from China. There are no pump manufacturers in America – zero. But we’re working to switch to one in the Netherlands. So it’s a work in progress but it’s better to start with something than to not do anything at all.”

Provided that next week’s crowdfunding round goes well, the aim is to establish the product as a subscription-based service.

After the initial delivery, refills will be sent to customers in a set of three within a simple paper envelope.

After that, Libermann has his eyes on extending the product range under the Forgo brand.

“We can do this for everything – body wash, face wash, deodorant, toothpaste,” he said.

“I’m actually testing the current product myself and it works great with dishes. It’s all the same really, the only reason we branded it as a hand wash is because customers are apparently more into that separation. But eventually, we can do a more radical one that is just universal soap.”

The debut Forgo product was officially launched via an installation inside of an old wartime bunker turned toy museum at Stockholm Design Week, which gave visitors an insight into the two year development process behind the product.

Among the more than 200 other events taking place across the city for the occasion was a “staged fantasy” installation by Norm Architects, that allowed visitors to step inside the home of an imaginary artisan.

Local brand Massproductions, meanwhile, launched its outdoor sofa Roadie, which was crowned product of the year at the Stockholm Furniture & Light Fair.

The post Form Us With Love declares war on plastic with launch of powder-to-liquid soap  appeared first on Dezeen.