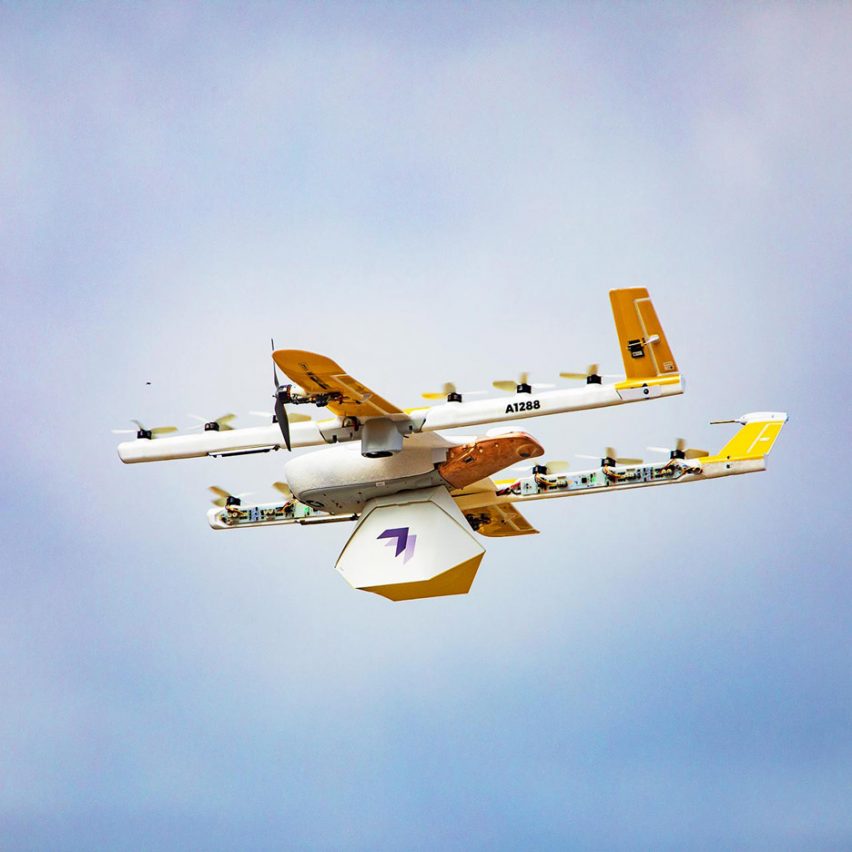 The Wing drone delivery system developed by Google is being used to deliver toilet paper and medicine to residents in lockdown in Virginia, USA.

Run by Google’s parent company Alphabet Inc, the drone delivery service had been running a test programme for several months before the coronavirus pandemic.

Now Wing‘s drones are being used to deliver essentials such as medicine, baby food, canned tuna, toilet paper, toothpaste and pasta for people living around the town of Christiansburg in rural Virginia.

Wing has seen a significant increase in requests for deliveries since the coronavirus outbreak began.

“We’ve made more than 1,000 deliveries in the last two weeks across all our communities,” Wing CEO James Ryan Burgess told Dezeen.

“While we recognise that this service will be a small relief during this time, we hope it means one less trip to the store for items our customers may need, and provides an efficient way for local businesses to reach their customers in a time when limiting human-to-human contact is important.”

The coronavirus pandemic has prompted the state’s governor to put Virginians under a stay at home order until 10 June 2020.

To reduce transmission, people have been asked to avoid contact with people outside of their household. Drone delivery allows people to buy essential items without leaving their house or putting delivery people at increased risk.

Wing’s drones have a wingspan of one metre and can carry parcels that weigh up to 1.3 kilograms for a round trip of 12 miles.

Google began testing its Wing drone delivery service in Australia in 2014, where the unmanned aerial vehicles dropped off dog treats and first aid kits for farmers in the outback. Last April, Wing became the first drone operator in the USA to be approved as a commercial service to deliver goods by the Federal Aviation Administration.

Customers submit an order via an app, prompting a drone to fly to a delivery facility to pick up the items packed in a specially designed cardboard carrier.

Laden with its package, the drone flies to its destination at altitude, before dropping and hovering at a height of seven metres above the ground to deliver its cargo.

The package is lowered on a tether and automatically released. There is no need to interact with the drone or unclip the package before the drone flies off and returns to its base.

In Virginia the unmanned arial drones are being used to deliver orders made via delivery company FedEx and supermarket Walgreens.

Local bakery Mockingbird Cafe has also been using Wing to deliver pastries to residents stuck at home during the lockdown, and a coffee shop called Burgh Coffee has signed up to deliver its cold brew using the service. Wing still has two delivery sites in Australia, and is also trialling the service in Helsinki, Finland.

Drone deliveries are changing the way that people live in urban areas, as explored in Dezeen’s documentary short Elevation.

As countries around the world attempt to contain the spread of covid-19, drones are one of the technologies being used to help maintain quarantine. In China, drones were used to hold lights over hospital construction sites at night and to tell people out in the streets to stay at home.