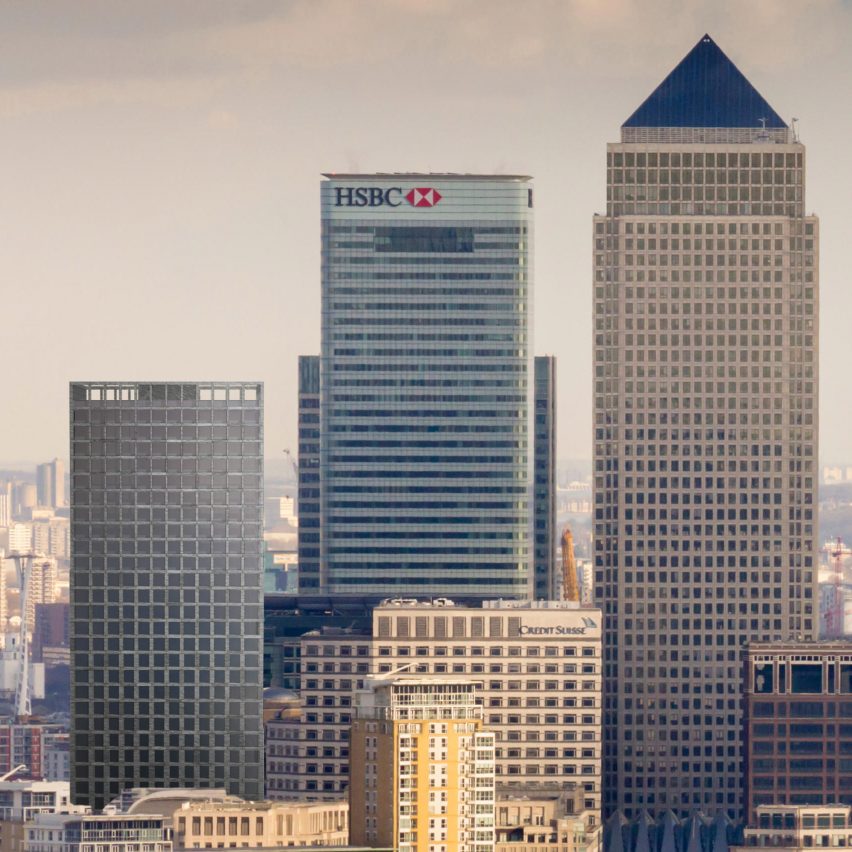 Amin Taha‘s architecture studio Groupwork has collaborated with structural engineer Webb Yates to design a conceptual 30-storey stone office block that would be cheaper and more sustainable than concrete or steel equivalents.

Groupwork and Webb Yates designed the skyscraper to investigate how the cost and sustainability impact of a tall building with a stone structure compared to one with a concrete or steel structure.

The research found that large commercial buildings could be built more cheaply and with less of an environmental impact using stone rather than concrete or steel.

“It’s research to investigate how tall you can go in stone,” Taha told Dezeen. “[To] demonstrate to commercial clients – that are consistently building a lot and at a large scale – that it’s cheaper and enables a 90 per cent reduction of embodied CO2.”

The stone skyscraper research project forms part of an exhibition called New Stone Age at the Building Centre in London, which was curated by Steve Webb, co-founder of Webb Yates, Taha and Alex Cotterill from Groupwork and stonemason Pierre Bidaud. Both projects aim to show the potential stone has as a modern building material.

“We’ve only just rediscovered what architects have known for 7,000 years,” said Taha. “Stone is versatile, has strength, longevity, is plentiful, cheap and, with zero embodied carbon, well placed for a renaissance.”

The tower has a stone structure based on Groupwork’s RIBA Award-winning 15 Clerkenwell Close project, but at a much larger scale.

“It is the same exoskeletal, trabeated [post and lintel] structure extrapolated from six to 30 storeys,” explained Taha. “But it uses basalt instead of limestone.”

“It has larger floor plates and spans, built in either cross-laminated timber or pretensioned stone and at 30 storeys various parts of the structure require fire integrity for 90-120 minutes instead of 60 minutes [as is required for shorter buildings],” he continued. “We tested limestone, granite and basalt at the British Research Establishment with the latter found to perform best.”

The research showed that a stone tower with stone floors would have considerably reduced levels of embodied carbon compared to steel or concrete structures.

“Inherently, stone has zero carbon footprint,” stated the report. “It is the energy used in quarrying, preparing and lifting the stone into place where CO2 builds up.”

Combining a stone frame with cross-laminated timber (CLT) floors would further reduce levels of embodied carbon and could create carbon negative buildings. Timber can be a carbon-negative material, as trees capture CO2 and store it in wood.

“A combination of stone exoskeleton with CLT floor slabs is cheaper than the equivalent building using steel or concrete frames and with a negative carbon footprint,” explained Taha.

“Put another way, we could demolish and replace concrete and steel framed buildings with stone and timber and still be carbon negative.”

According to cost consultants Jackson Coles the towers could also be built cheaper than steel or concrete equivalents.

The cost of a stone structure would be marginally higher than steel or concrete. However, as stone would not need to be fireproofed, weatherproofed or clad with stone veneers, the overall cost would be lower.

London-based Groupwork, which was previously called Amin Taha Architects, used raw quarried limestone to create the structure of a housing block in Clerkenwell, which was shortlisted in the housing project category of Dezeen Awards 2018. The studio has also designed a 10-storey block of flats in Finchley, London, which has a load-bearing stone structure.

Photography is by Chris Jackson.