Like in season one, the Geist Group lobby was shot on location at the Toyota Complex in Torrance, California. On soundstages, Ekberg and her team created the offices, meeting rooms, and hallways deep inside the fictional building. Throughout the space, the walls are made of what looks like poured concrete but is actually plaster, applied by hand. “The main plasterer we worked with, he is brilliant. He can do any texture you want. He worked on it for about a week, and he showed me different options, and I was just amazed. It was so beautiful and so real,” says Ekberg. Throughout the offices, the furniture is modern and the color palette is dark. Many of the plants are encased in glass. “It feels like they are separated and want to get out and harm you,” she says. 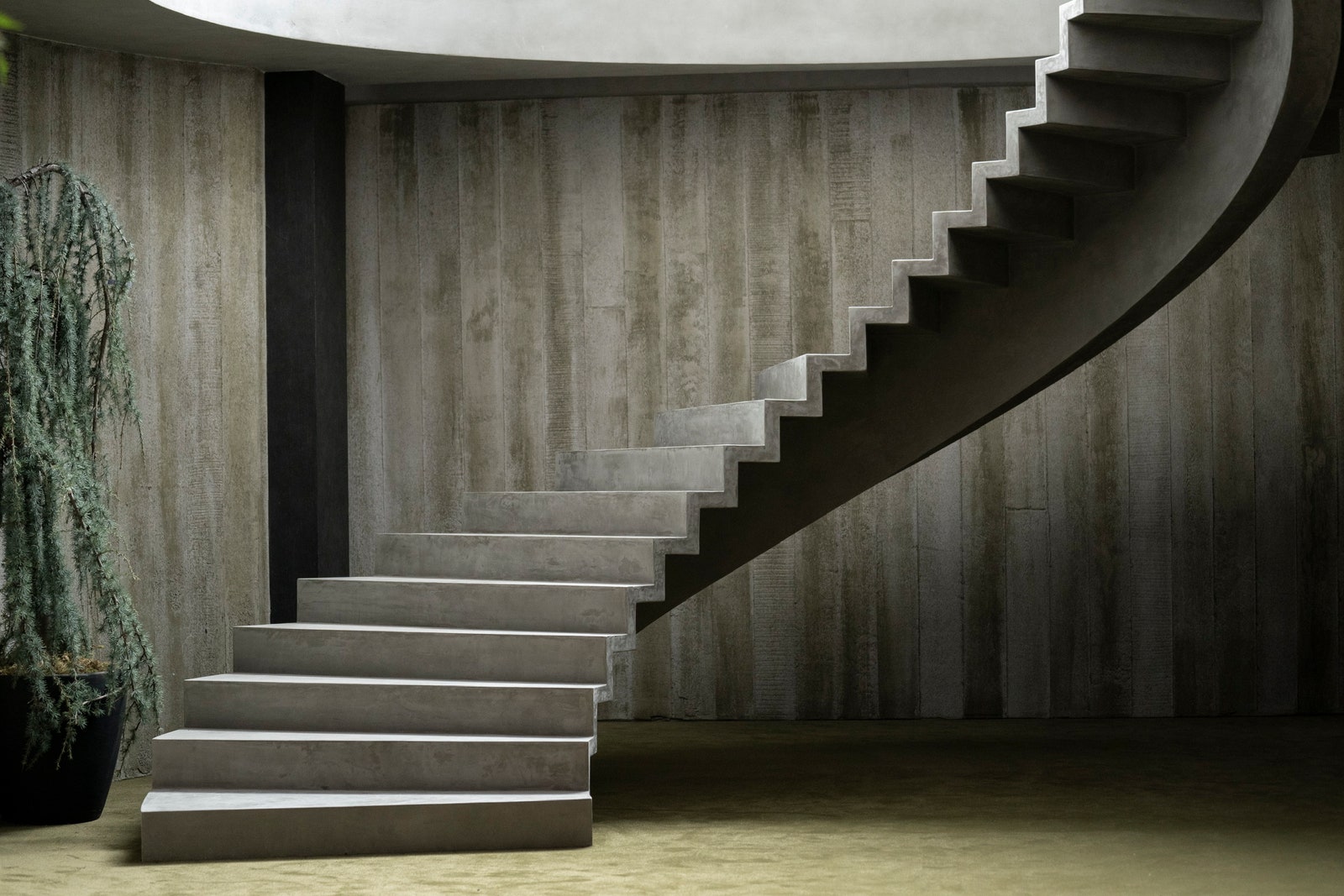 “I wanted to have the staircase without a railing, because it is so much more beautiful,” says Ekberg.

The showpiece of the set is a spiral staircase that also appears to be made of concrete. “I really liked the idea of having a staircase that floats into space and leads you up into a different world,” says Ekberg. “It was also a bit like sci-fi style.” It took the team weeks to figure out how to build the spiral staircase on set, given the fact that they couldn’t use the materials that would be necessary to hold the structure up in real life, such as reinforced concrete. “We had to think about a way where we could [create the same thing] from wood or metal,” Ekberg explains. “It was a long and very exciting challenge.”

Atop the staircase is the greenhouse of the CEO, Leonard Geist. This set, as well as his farmhouse and acres of plants (which, season-one viewers will recall, possess extraordinary properties) has a utopian quality. In creating Geist’s space, says Ekberg, “we wanted to show the difference between what the company is and what he wanted it to be. He set out to make it nice, welcoming, warm, close to nature. It got out of his hands.” The farmhouse was actually built from the ground up for the show at Big Sky Movie Ranch in Simi Valley, California, and the fields were extended using special effects. (Other projects filmed there include Transformers, Men in Black, Little House on the Prairie, Twin Peaks, and more.)

If it seems like an architectural feat to create this entire fictional world, that’s because it was—though, of course, building the sets provides faster gratification than the often slow process of erecting actual buildings. It is this, Ekberg notes, that drew her to the profession. “I love architecture and I really appreciate it, but I love what I do because it changes,” she says. “It gives you so much more artistic freedom that you don’t necessarily have in the architectural world.”