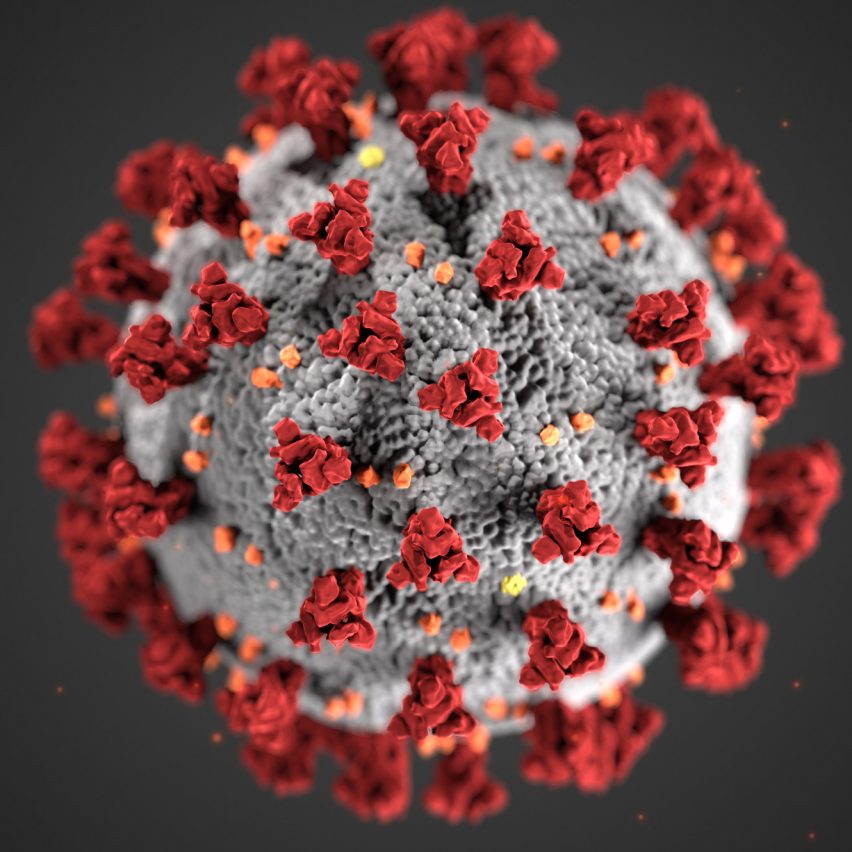 A medical illustrator behind the first 3D images of the coronavirus particle has spoken to Dezeen about how his team branded an invisible disease that “needed an identity”.

The team at the Centers for Disease Control and Prevention (CDC) in Atlanta, Georgia was aware they were creating a visual identity Covid-19 by creating the now-iconic images of an individual virus particle, or virion.

“Based on previous outbreaks, we knew the CDC needed an identity when presenting public health information of Covid-19,” said Dan Higgins, a medical illustrator at the CDC.

Released to the public on 31 January – the day after the World Health Organisation declared a global health emergency – the illustration immediately gave tangible form to a disease that had already killed 213 people in China.

CDC wanted to create “something that says this virus is real”

Two days later, the first death was recorded outside China when a 44-year-old man died in the Philippines.

However, while coronavirus was making headlines around the world, few people knew what the virus was, what it looked like or how it spread. This made it hard for the CDC to communicate the risks of Covid-19 to the public.

“Instead of being referred to it as ‘invisible,’ we wanted to create a realistic virus that people can envision when walking into public places or coming in close contact with strangers,” Higgins said. “Something that says this virus is real, and it’s to be taken seriously.”

Yet the images also had to have scientific integrity, Higgins told Dezeen via email.

“Because part of CDC’s mission is providing public health information to save lives, we felt it needed to be as accurate as possible,” said Higgins, who is credited with creating the illustrations along with fellow medical illustrator Alissa Eckert.

“We took artistic license on the color, but we wanted the specific structures of the virus to be as close to real life as possible.”

Higgins and Eckert worked with scientists at CDC to understand the microscopic virion, which measures just 125 nanometres, or 125 thousand-millionths of a metre, in diameter.

“When creating illustrations, animations and other infographics that represent microscopic subjects, the challenge is presenting something that has no visual reference,” said Higgins.

Visible only through an electron microscope, the particle resembles a grey blob surrounded by a blurry haze of protein spikes that have become the signature of the virus.

“After we researched the basic morphology of the structure, we consulted subject matter experts in the lab at CDC,” said Higgins, who modelled the virion in 3D Studio Max, using 3D files from Protein Data Bank, a library containing 3D models of proteins and other microscopic particles.

“Once we knew what all structures were that we needed from this virus, we went to the Protein Data Bank,” he said. “There, we were able to download the actual 3D shapes of each of the proteins that make up Covid.

“From there, we optimized them and then took them into 3D software where we created all our lights, materials colors etc.”

Higgins and Eckert then had to make a series of design decisions, adding form, colour, texture and shadow that would help clearly communicate the virus to the public. Their priorities were “accuracy and presenting a serious mood”.

“Designers at CDC came up with a design guide to be used with all material related to Covid-19,” explained Higgins. “We chose variations of the colors from their palate that we thought would help deliver the right punch to the viewers.”

In the illustration the virion’s spherical lipid envelope, which protects its RNA genetic code, is represented by a grey surface with a “stony” texture.

The surface of this sphere is studded with three types of proteins. The signature spiky S proteins, which attach to host cells to allow the virion’s RNA to enter the host and replicate, are coloured red. The crumb-like M proteins that dot the spherical membrane are coloured orange. The small E proteins, or envelope proteins, are yellow.

The colours were chosen for visual impact. “The bold red of the S proteins contrasted by the gray of the viral wall, adds a feeling of alarm,” said Higgins. “The orange M proteins and the yellow E proteins make it more colorful, but don’t compete too much with the red.”

“Shadows add to the realism”

“We chose less saturated colors so that it didn’t come across as too playful… we knew this virus had to be taken seriously,” he continued. “The strong shadows of the textured surfaces add to the realism of the virus.”

In reality, microscopic particles such as virions do not have colour, texture or shadows. The CDC team added these to make the illustration comprehensible to people unfamiliar with nano-scale biology.

The aim was to make it appear “so real that you can almost touch it,” Higgins said. “This virus, often referred to as invisible, suddenly has a face and is brought to life.”