Step off the elevator into Niki Bergen and Andrew Zuckerman’s Manhattan apartment, and you’re instantly blitzed with images from nature—nature like you’ve never seen it before. At the far end of the hall, a nine-foot-tall grizzly bear rises up on its hind legs, locking eyes with you. Nearby, a ghostly snowy owl spreads its wings, frozen in mid-flight. Then there’s the expanse of floral wallpaper, arrayed with fanciful cannonball and Pride of Burma blooms.

This wild kingdom makes quite a first impression, and it continues throughout the 3,300-square-foot loft that the couple share with their three children in Chelsea. Everything is a thoughtful expression of personal and professional passions, explains Zuckerman, a photographer and filmmaker whose work explores the intersections of nature, culture, and technology. Captured in ultra–high resolution, against stark white backdrops, his celebrated images of flora and fauna have a hyperreal quality that’s “not quite pure, not quite manufactured,” as he puts it. “There is a kind of in-betweenness about them that I find interesting.” 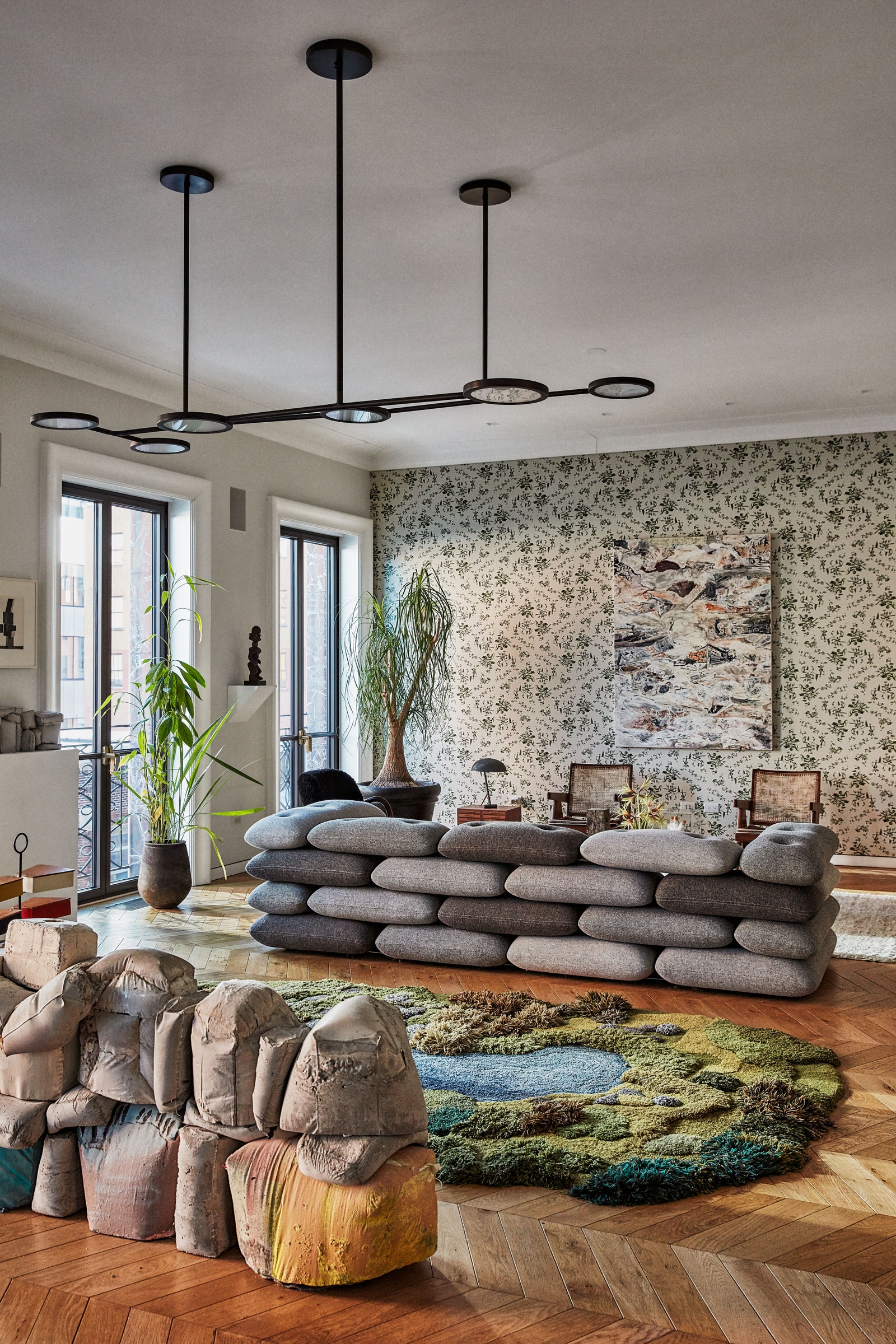 Andrew Zuckerman and Niki Bergen’s Manhattan loft is furnished with an Alexandra Kehayoglou rug, Brick sofa by Kibisi, Matter Made light fixture, and sculpture (foreground) and painting by Christopher Astley.

It’s that quality, in part, that inspired the couple to launch Superflower, a new business creating digitally printed botanical wallpapers from Zuckerman’s photographs. The initial collection features nine patterns, each incorporating as many as 10 different images—peonies, birds-of-paradise, cannabis flowers, to name a few—shot at locations such as the New York Botanical Garden and the Smithsonian. Nine standard colorways (custom hues can be created) draw on antique delftware and French woodblock prints, as well as the Japanese ikebana scrolls the couple collects.

“This project had a lot to do with ikebana and these incredibly odd arrangements of flowers,” says Zuckerman, who developed the designs over the years, in between work for clients such as Apple, Puma, and BMW. “I started thinking about the idea of the ‘superflower,’ digitally compositing multiple species together and then putting it in repeat.” The project was a natural fit for Bergen, who had worked for years as a do-it-all design assistant to home textiles–and–accessories maven Sandy Chilewich. “Andrew and I always had this dream of working together,” Bergen says. “And I had experience in how to make products.”

For the couple, installing the wallpaper in their own home was by far the most radical step they’ve taken in the four or so years since they moved into the building, which was designed by AD100 architect Steven Harris. Not that things had remained static. “I’d come home and it was like, ‘Where’s that picture?’ ” Bergen says of Zuckerman’s habit of constantly reconfiguring furniture and art. According to him, it’s all about “reactivating” the things they’ve collected over the years, from a rare Polaris lamp by the Italian group Superstudio to a small wood cabinet by sculptor Ralph Dorazio, whom the couple became close to before his death. Indeed, many of the artworks and objects are by friends, including Christopher Astley, Adam Fuss, Bec Brittain, and Bjarke Ingels, who codesigned the living room’s KiBiSi Brick sofa in custom colors.

“Everything in the apartment has a story, a certain richness, and there’s a conversation with what’s next to it,” says Zuckerman. The wallpaper just adds another dimension, while making the apartment “feel really homey for the first time,” he says, vowing to live with things as they are for a while. “Or I might change something tomorrow.”