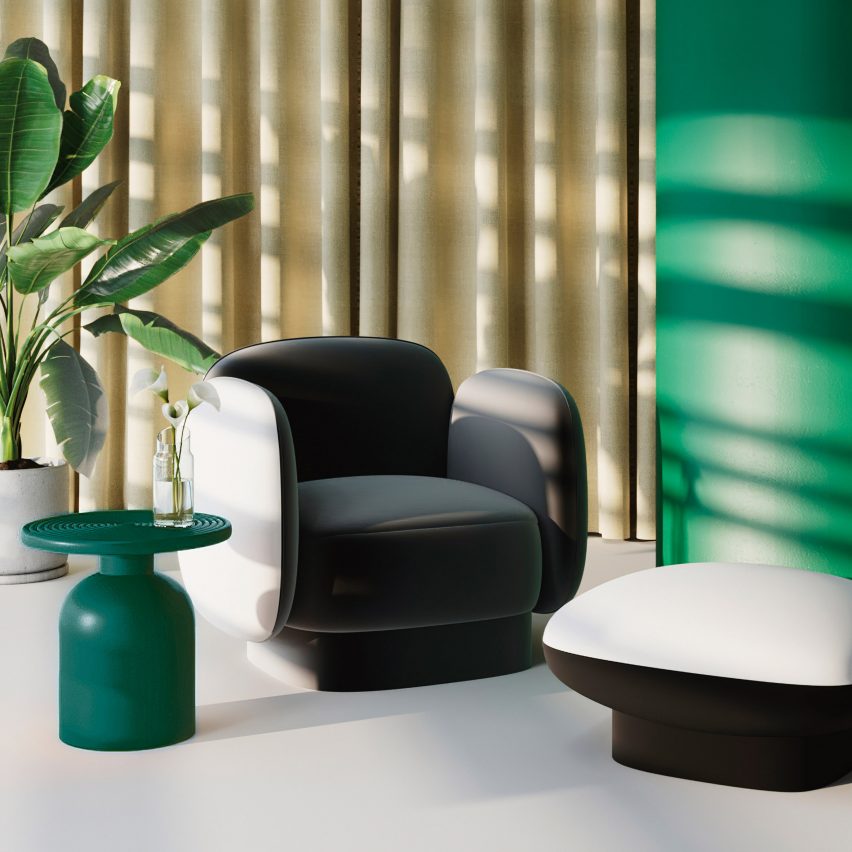 The latest collection from Chinese furniture brand Maisondada includes a seating series that references a David Bowie track and an armchair inspired by sumo wrestling.

The company founded by designer Thomas Dariel and Delphine Moreau stood out at this year’s Maison&Objet trade fair in Paris with products including the Sumo armchair and Major Tom seating collection.

Maisondada, which launched in 2016 in Shanghai and Paris, described the theme for this year’s collection as “futuristic and time-for-dreaming designs”.

The concept expands on its more general mission of “creating objects that are gently crazy, defying certainty, taste and gravity.”

Sumo – a chunky armchair with a low seat and a curved back wrapped in wrinkled fabric – epitomises the company’s playful aesthetic.

Its squat shape and oversized proportions reference Japan’s famous wrestlers, as well as typifying the “plus-size furniture” trend identified by Dezeen columnist Michelle Ogundehin as a key direction for 2020.

“With four sturdy legs and a burly figure, Sumo is firmly anchored to the ground,” said Maisondada.

“Yet while the armchair is the very image of purpose, fearlessness and unyieldingness, its rare shape, soft lines and fabric upholstery brings it elegance and stature.”

The Major Tom seating collection comprises a sofa, armchair and ottoman influenced by the futuristic clothing designed by Pierre Cardin and worn by David Bowie in the video for his song Space Oddity.

The furniture features contrasting upholstery on the inner and outer surfaces that creates the impression that it is wearing a jacket, as well as “lunar shapes and curved silhouettes” that extend the references to outer space.

The company further expanded its upholstered furniture collection with a circular ottoman called Ziggy that references the title of a David Bowie album, and introduced a desk with narrow legs supporting a slender tabletop containing a drawer.

In addition to sofas and chairs, Maisondada launched other furniture items and accessories, including a ceramic side table called Ousmane and a series of side tables with irregularly shaped tops inspired by the Spanish painter Joan Miro.

The new accessories include a range of mirrors called Morocco Pop! by French designer José Lévy, which are inspired by his memories of Morocco and its geometric architecture in the 1950s.

Several of the products released by Maisondada in the past few years were also updated for 2020 with new fabrics or colour options.

These included the curvaceous AYI armchair and the Yiban Yiban chair, which features a backrest comprising two separate elements.

Maisondada’s founder and lead designer Thomas Dariel moved to China in 2006 to launch his own interior design studio. He was joined in 2008 by Delphine Moreau, and together they built a brand that combines French design heritage with eastern cultural influences.

The studio is part of a new wave of creatives who are redefining how design in China is perceived.

In 2019, the country was named as guest of honour at Design Biennale Saint-Étienne and six young Chinese designers were highlighted as rising talents at the Maison&Objet design fair.

Architect and designer Rossana Hu has also described “a new generation of creatives who are doing amazing work exploring issues, exploring materials and working with technology”, which was highlighted by a 2019 exhibition called China Design [Working Title] that focused on work by the country’s young designers.