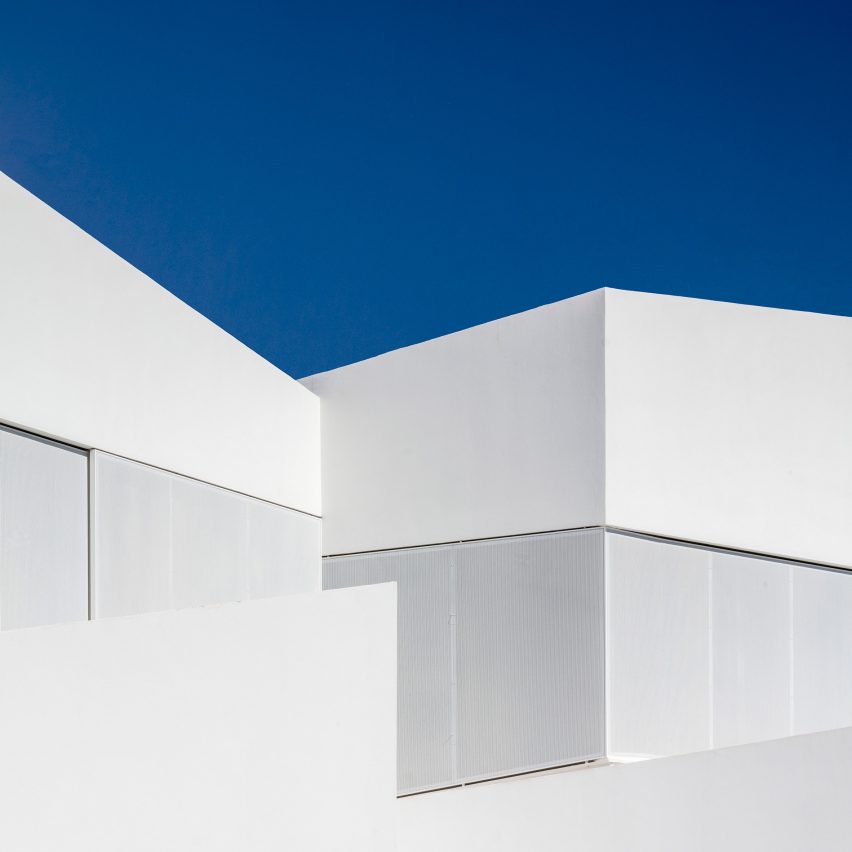 The rocky north coast and traditional white-washed buildings of Menorca inform the irregularly stacked boxes of a holiday home in Coves Noves by architects Nomo Studio.

Called Bridge House, the five-bedroom home is located on a generous site overlooking the sea.

Its striking shape is made from a cluster of stacked pentagonal and square forms, which cover a large open terrace at its centre.

“The idea of stacking was a way of breaking down a large house to feel smaller, and from inside it created interesting geometric sequences in plan and section that both separated and united spaces,” Nomo Studio founder Karl Johan Nyqvist told Dezeen.

Playing on this dual nature, Bridge House’s volumes have been oriented so that public areas face outwards to the sea views.

Bedrooms face inwards towards private terraces, with the garage and laundry room and a guest bedroom occupying their own stand-alone units.

“This division creates a house that on one side is very open visually and programmatic, the side to see and be seen,” said Nyqvist.

“The other side is completely private with individual terraces rotated away from the public domain.”

The central open terrace is for large gatherings and features an outdoor kitchenette.

It is in close proximity to the swimming pool, reached  via a concrete patio.

A set of steps leads up to a second, more sheltered patio at first floor level.

This terrace is designed for everyday use, and us hidden from overlooking by walls at either side.

This patio connects to a kitchen and internal living area on the first floor, which also connects to the master bedroom and opens onto a stepped concrete patio at the rear of the home.

Shutters made of almost opaque white metal mesh wrap around both levels.

These shutters are for locking the house down when it is not in use.

“When the shutters are closed, the strong geometric volumes stand out as pure white shapes against the blue sky,” said the studio.

The pitched roof of each volume creates a varied roofscape, in reference to the traditional buildings found on Minorca.

Inside, the gently sloping ceilings have been painted a pastel green.

Light birch wood has been used to create wardrobes and mark thresholds between rooms.

Floors have been finished with an in-situ cast rough terrazzo to contrast the smooth white of the exteriors.

White marble features in the kitchen tops and bathrooms.

Nomo Studio has previously completed several homes in Menorca, including a home clad with limestone dug from its site and a “pixelated” villa that uses a similar technique of stacking to create a series of living spaces.