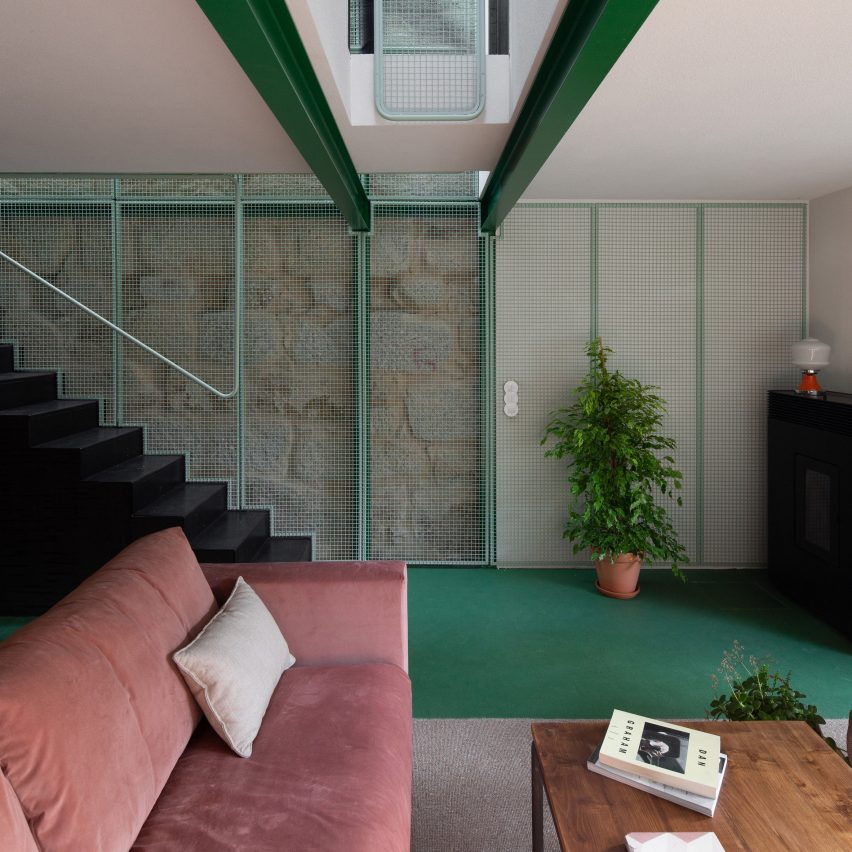 Architecture studio Ottotto has remodelled the interior of this home in Porto, using green metal mesh to encase its original stone walls.

When Ottotto removed the house’s old plaster they discovered the original stone walls.

The studio decided keep them exposed, covering them with green metal mesh to serve as a “memory” of the former building.

Designed for an imaginary client, the concept for the project drew on the work of American artist Gordon Matta-Clark.

Ottotto carved spaces out of the original interior to create skylights and mezzanines.

“As in the work of Gordon Matta-Clark, the shape of the building remains intact and it is its interior composition that is shaken by cuts, excavations and modelling,” said the studio.

A new structure of green steel, along with green floors and metal mesh, gave the remodelled home its name –GreenHouse.

The steel structure supports a series of new volumes, built from brick and covered in white render, that hang above a large, slightly sunken living, kitchen and dining area.

At first-floor level, accessed via a black staircase, these white volumes house a bedroom at either end of the home.

A bathroom in the centre sits alongside a small study area with a balcony.

Above, a small attic space houses a studio, an additional bathroom and another mezzanine space.

Externally, the front of the home has been kept exactly as it was, with the only reveal of the new intervention being given in the rear garden.

Here, a new elevation has been created using corrugated metal.

Inside, the white volumes are set back from these original walls.

This creates thin strips of space that pull light into the home through skylights above, and are overlooked by small windows on the upper storeys.

White walls and crisp interiors foreground the green elements of the interior.

Thin steel elements create staircases up to the mezzanines and a bright red curtain can be drawn to provide some privacy for the first floor.

Ottotto was founded in 2015 by Theresa Otto.

In 2018, the practice took part in a group show in the grounds of the Alvaro Siza-designed Serralves Foundation in Porto, designing a pavilion covered in corrugated metal to look like a dilapidated shed.

Photography is by Alexander Bogorodskiy unless otherwise stated.