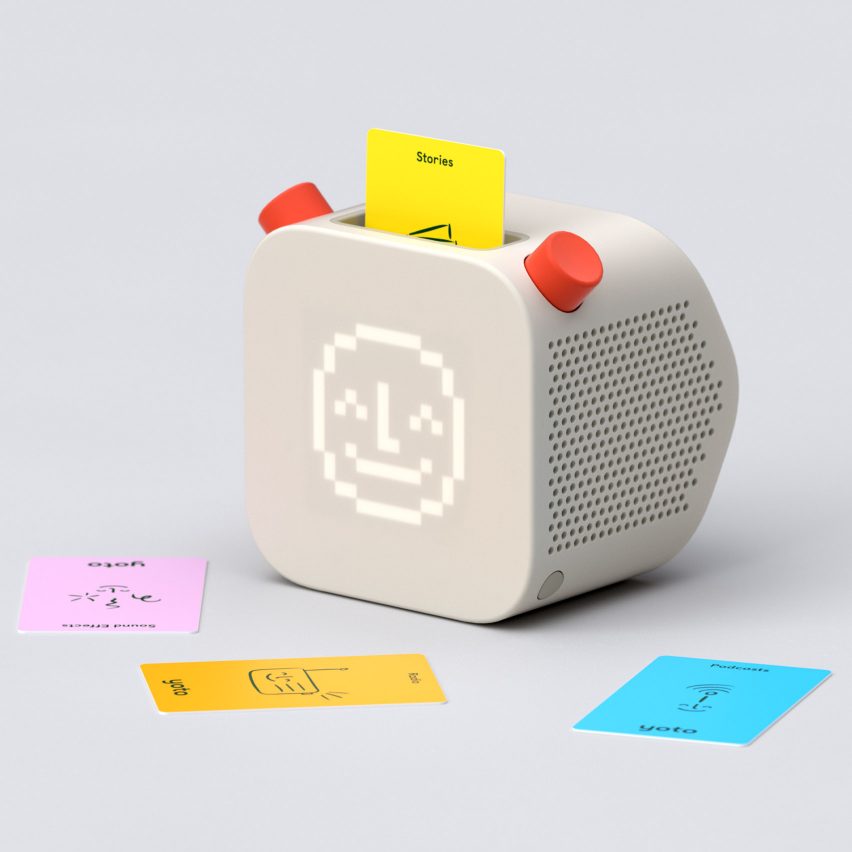 Tech startup Yoto teamed up with Pentagram to develop an interactive audio toy that plays stories, music, radio and podcasts for children without the need for a screen.

Yoto CEO Ben Drury and CCO Tom Ballhatchet worked with Pentagram partners Jon Marshall and Luke and Jody Hudson-Powell to develop a product that “prioritised kids being in control”.

The Yoto Player’s simple design has a slot where physical cards are inserted and two buttons that can be pushed and twisted for playback and audio control.

Yoto called in Pentagram to revamp and build on the foundations of their first Yoto Player, which was launched in 2015.

The studio was responsible for the industrial design of the audio player, as well as the visual identity, packaging, and website and app design.

“Pentagram was able to work with this ‘baggage’ and set up a process that was really quite collaborative and that always anchored children and parents in the heart of the design,” said Ballhatchet.

“What impressed me most was the way Pentagram managed to navigate the creative tensions within the broader team,” he added. “We brought our opinions with us!”

“It was a collaborative creative process where we were able to respond in a way that positively moved things to a better place.”

Instead of a screen, the device features a 16-by-16-pixel colour display on its front surface that projects some feedback and interactive content without distracting from the audio.

Users can also purchase a Make Your Own card, which allows children to draw and upload their own homemade content.

The device has an angled back allowing it to be placed upright on a table or shelf, or tipped upwards so that the display faces the child when being used on the floor.

A bedtime mode can be activated when the device is turned on its face, putting the display to sleep and activating a nightlight on the back.

It also has a battery, allowing it to be used anywhere, and a magnetic dock, so children can charge it safely themselves when necessary.

“It’s not often that you get to work with a company that’s solving something that affects your home life so directly,” said Jody Hudson-Powell.

“Both Luke and I have young families, and we instantly felt really passionate about the product and its potential – hopefully this is captured in the brand we’ve created alongside the Yoto team.”

“The challenge we set ourselves was to create an identity that worked for the entire family, hopefully we got that right too,” she added.

Hudson-Powell developed the Yoto visual identity to work across print, online and on the Yoto Player’s 16-by-16-pixel display.

They refined Yoto’s original smiling face logo to match the new typography style – Castledown by Colophon Foundry, which was selected as its letterforms mimicked the action of drawing letters used by children when they first learn to write.

Cheerful illustrations have been made to match across the content cards and packaging.

The designers opted for a colour palette that looked both playful and modern, appealing to both children and their parents.

Coral and grey is used on the product itself, while forest greens and sandy tones can be seen on the packaging. Primary colours of yellow, green, red, blue, pink and orange have been used for the content cards.

“It was fascinating to collaborate with Yoto on the design of the Yoto player – a product where every detail from the card slot to the charging dock and the three different orientations aims to put children in control of their own experience, helping to awake their imagination through stories and music,” said Marshall.

Pentagram is one of the world’s largest design consultancies, and has previously created new brand identities for the workplace messaging system Slack and Mastercard.

In its most recent project for Yahoo, the agency overhauled the search engine’s logo to be more simple and flexible while also referencing the brand’s “Looney Toons-style” logo from 1996.