A well-designed restaurant should not only sit harmoniously with its surroundings but also enhance them. When it came to the refresh of the new dining room at Claridge’s in London—Davies and Brook by Swiss-born chef Daniel Humm—the mission was to bring the space back to life. Named for the intersection of roads on which the hotel stands, the restaurant delivers on upscale elegance that Claridge’s is synonymous with, but it also sets the stage for chef Humm’s culinary genius, which gifted him three Michelin stars at his New York restaurant Eleven Madison Park. Every design detail, from how the sauce pools on the stoneware plates to the ephemeral shimmering of the Irish cast-glass columns, is orchestrated as an amazing theater of service.

“Everything we did was to try to fill the room with light,” explains Brad Cloepfil, of NYC-based design practice Allied Works, who previously collaborated with Humm on Eleven Madison Park. The restaurants share similarities, primarily that they are both in the Art Deco style, but chef Humm adds: “I am also connected personally to the space, as I worked in the kitchen at Claridge’s more than 25 years ago at the start of my career, so this feels like a full circle moment for me.” 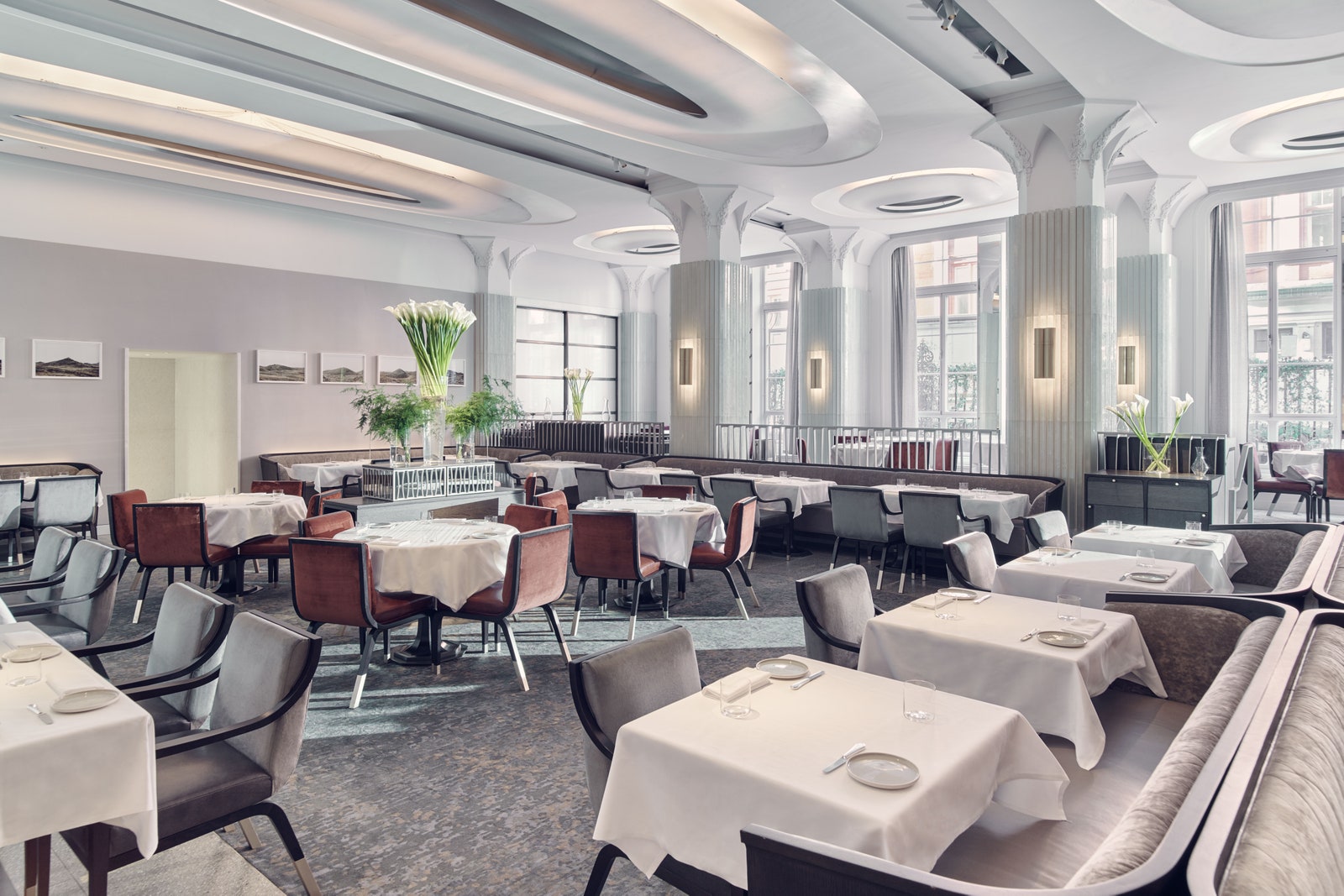 “Though we very much consider this to be a sibling to Eleven Madison Park, it was important that the spaces have their own identities,” says Humm of the new design. “We were respectful of the history of the hotel and the neighborhood—a sense of both place and time is very important to me as a chef and to Brad as an architect and designer.”

The setting is open, airy, and connected to the street, so the way that daylight passes through the glass columns and glints off the white bronze metalwork is really beautiful. The floor is travertine with inset custom-made carpets to soften sounds, and the dark-stained wood chairs feature smart white bronze socks with a top-stitch pattern—a lovely detail for the eye. The sofa-like velvet banquettes wrap around the space, adding a level of comfort that’s almost residential in feel.

The elegant neutral scheme (with a touch of red) is typical of a high-end restaurant, but it’s also warm. “It has a wonderful vibe that way,” says Cloepfil. “The decor has a light hand. However, all the materials are rich.” Deeply interested in contemporary art, Humm and Cloepfil chose a 40-art photography installation by American artist Roni Horn, which is integral to the space—to a degree, the landscape imagery informed the lighting and palette. “I think we got Roni to approve the wall color,” Cloepfil admits. Chef Humm adds: “When we create restaurants, one of the most important things is the sense of welcoming people into our home. Just as a home has personal touches, I wanted to make sure the restaurant had elements that were personal to me. Roni Horn is one of my closest friends. This work was a result of that friendship and created specifically for this space.”

Everything in the restaurant is custom-made down to the stoneware plates. Produced for Allied Works by French-based ceramics company Jars, they’re the same as Eleven Madison Park’s but with different proportions to present the Claridge’s menu and added color for warmth. “I’ve been in love with clay forever,” says Cloepfil, “so to have the chance to design the tableware was a joy for me. Also, to go from designing museums to plates is pretty fun. It’s like a relationship with your body. It’s you, sitting at the table and those table pieces. You raise a little lip and it casts a shadow—it makes all the difference in the world.”

The dramatic ceiling treatment was inspired by the room’s original coffered ceilings. Allied Works created the domes, which are uplit with resin light fixtures to halo the rooms with a glow. The crystal on the columns reflects daylight to shimmering effect. “Over the years Brad and I have become good friends, and we definitely see eye to eye on design, artistry, and architecture,” says Humm of his partnership with Cloepfil. “He’s been a supporter of my work for a long time. We are both very interested in the reduction of things—not necessarily to the point of minimalism, though. I approach cooking in a similar way to how Brad approaches design and architecture.”

All the linear proportions, soft colors, and curvaceous shapes lend a certain femininity—a point Cloepfil doesn’t discount. “This is Claridge’s after all,” he explains. “It is inherently such an elegant space. We wanted to make the feel inviting so guests would visit the restaurant all the time. When the art’s hung and the people are there, the space feels fantastic. It all comes to life.”

The best restaurants are dictated by the people who inhabit them, as well as the time period, the legacy of the location, and how they reflect the chefs’ view of food and hospitality. It’s an alchemy of all these things. In other words, the incarnation of Davies and Brook may lead with the history of the building in a now-contemporary space—but the architecture is not the only subject here. Chef Humm is the guiding force. Describing the collaboration, Cloepfil says: “It’s like working with a theater director where you have to wait to see what’s being interpreted before you can even start. He thinks like an artist, his food is mind-blowing, and when you get to dine there you understand what his vision is.”