Tales from the Loop establishes its unique realm from the get-go, as Cole tries to help a young girl named Loretta (Abby Fortson) find her missing mother amid the grey-skied, snowy landscapes of the fictional Mercer, Ohio. The Canadian city of Winnipeg in Manitoba served as a substitute for the Midwest. “It was going to guarantee a good amount of snow,” he says. (Alas, a few balmy days led to a bit of special effects-enhanced powder.) 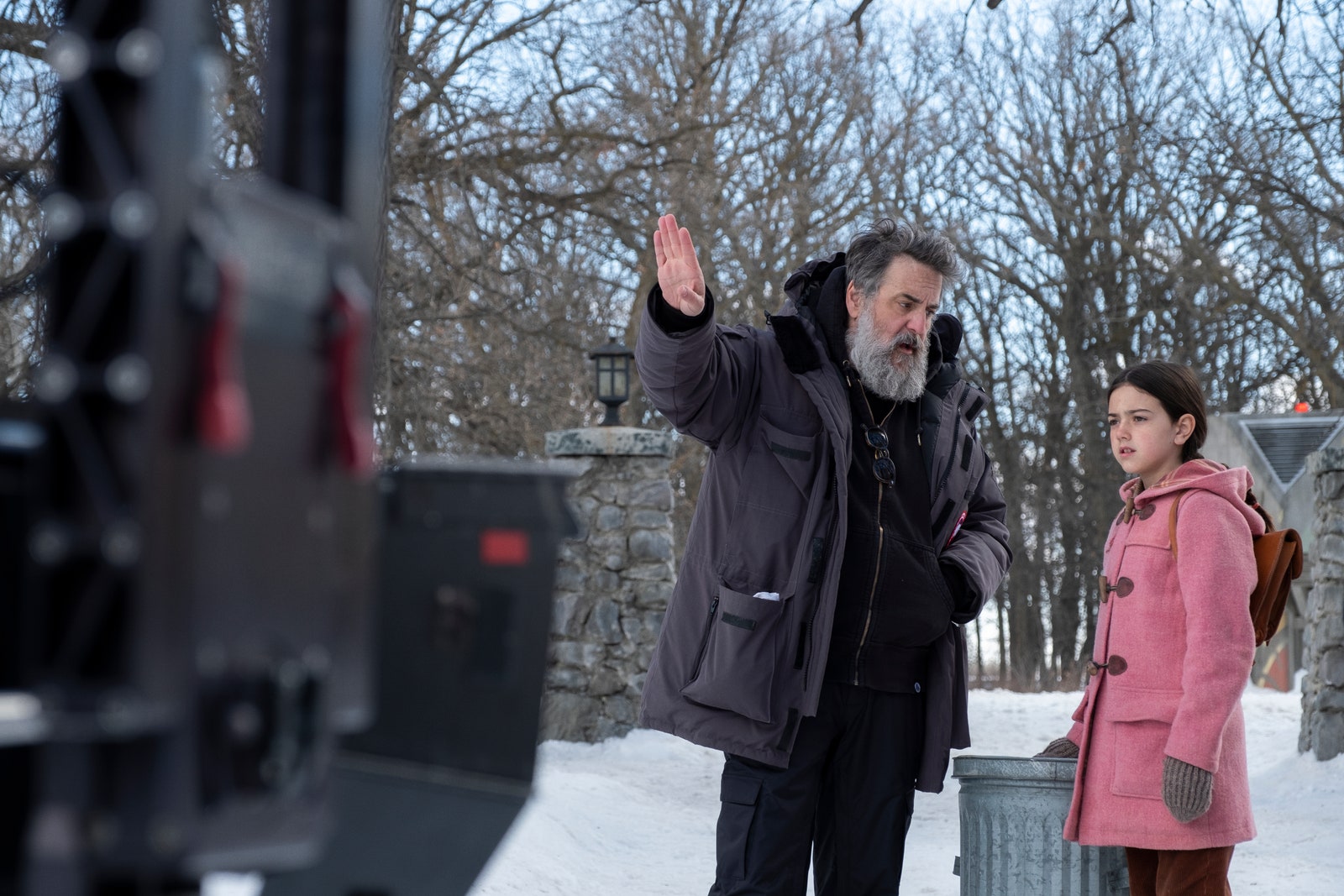 “We’re very careful about what we reveal,” says Romanek (left, with Fortson).

What Loretta (who’s from the 1950s) doesn’t realize is that she’s entered a time warp and landed somewhere around 1980. And while Stranger Things have happened, the retro touches here have a Eastern European flare akin to the oeuvres of directors Ingmar Bergman and Krzysztof Kieslowski. “You think it’s American, but there are subtleties,” he says. “We wanted period architecture from ’70s-era Soviet Union and late-’60s Sweden to create our own timeless world. This is not a nostalgia-fest.” Most of the items— including a yellow TV, Scandinavian chest and rotary telephone as seen in Russ’s family home—were sent in from overseas. “You can’t grab that stuff at a local thrift store in upstate New York or Canada,” he adds. “So Phil and Victor sent out shoppers with a guideline of references.”

Hall’s character (a grown-up Loretta) has an up-close view of The Eclipse down in the loop.

As for The Loop itself, it’s an expansive underground space with a nondescript entrance. And purposely so. “It’s understated to belie its overall vastness,” he explains, noting that the facility is structured as a six-mile loop with a “massively long” curved corridor. These interiors were constructed entirely from scratch: “We were really able to control the look of the show by building everything,” Romanek says. That includes the centerpiece item —an oversized sphere, i.e., “The Eclipse,” which radiates power. “I don’t want to give away too much behind the curtain, but we built about two-thirds of The Eclipse so that anyone would be physically able to touch it and look it at and we could have light bounce off it.” Romanek discovered its metallic surface from an iPhone wallpaper pattern on Pinterest.

Now that many of the design secrets have been revealed, Romanek would like viewers to focus on what really matters above and around The Loop: families and their emotional dynamics. “At its heart, we wanted the show to be about what these characters are going through,” he says. “There are dark topics but there’s an uplifting quality, and that’s ultimately what people are going to connect with. That’s why this is a good show for these weird times.”