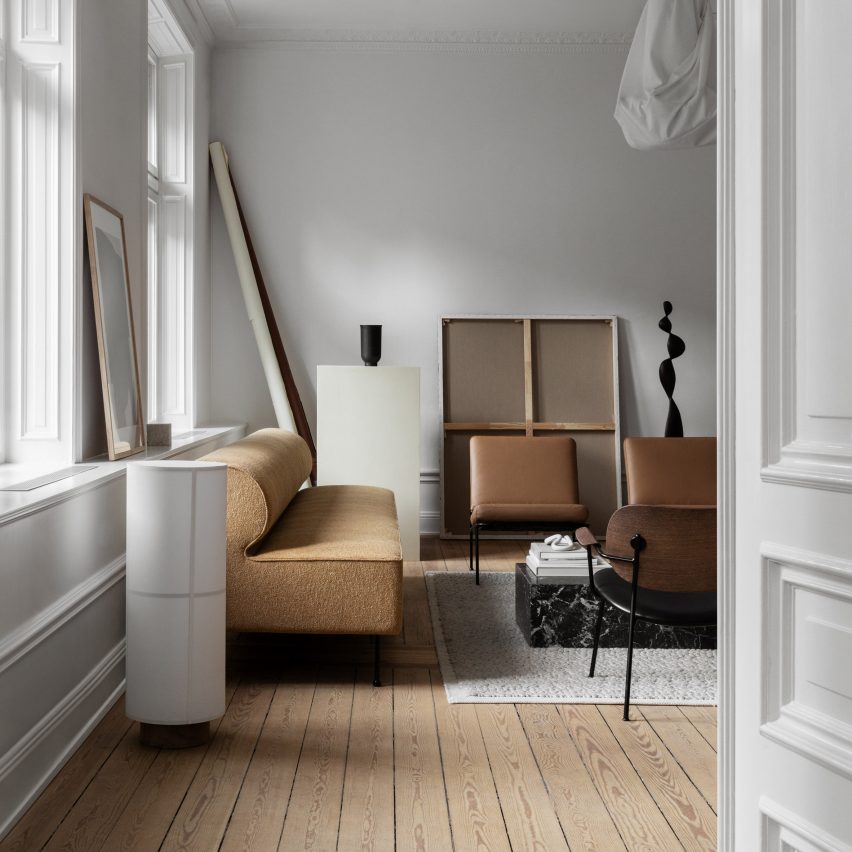 Norm Architects has worked alongside furniture brands Menu and Dux to curate an installation that resembles eclectic living quarters as part of Stockholm Design Week.

A “staged fantasy” intended to “immerse guests in the mind of an artisan”, The Sculptor’s Residence is peppered with an array of design-focused objects.

The four-room installation takes over an apartment at the heart of the Swedish capital and has been curated by Copenhagen-based practice Norm Architects.

Brands Menu and Dux have provided furnishings from their respective collections, while audio is provided by a selection of Bang & Olufsen speakers.

“The almost theatrical staging of objects pays homage to the ateliers of great artists – from Picasso’s Parisian hideout to Cezanne’s untouched studio in Aix-en-Provence – and allows visitors a glimpse into the artistic process, on a larger scale,” explained founding partner of Norm Architects Jonas Bjerre-Poulsen.

The living room-style area has been dressed with a rounded, oatmeal-coloured sofa and a pair of tan-leather chairs, which sit upon a textured rug.

At the centre of the space is a veiny, black-marble podium from Swedish stone company Östersjösten that serves as a coffee table.

Huge scrolls of paper and blank canvases have also been lent up against the apartment’s walls.

Visitors can wander through to an office-like room – it’s centred by a slim white desk that’s been scattered with books, material samples and paintbrushes, in another nod to the imagined lifestyle of the apartment’s owner.

Similar items can be seen on the black gridded shelf that appears in the apartment’s dining room, which also accommodates a marble-topped table and a couple of cushioned lounge chairs.

A timber-framed bed finally features in the bedroom, styled with neutral-toned linens.

The Sculptor’s Residence will be used as a talks and events space throughout the 2020 edition of Stockholm Design Week. Major installations from the event last year include The Baker’s House, which saw creative duo Farg & Blanche insert 12 contemporary objects into an ornate 19th-century family home.

Neri&Hu also created a house-like timber structure for the design week’s furniture fair – but later came forward to say that they were unhappy with the “abysmal” quality workmanship that had gone into making it.

Photography is by Monica Steffensen.

The post The Sculptor’s Residence installation lets you step inside an artisan’s home appeared first on Dezeen.