Sometime in the mid-’80s, a teenage Thomas Heatherwick was wandering the streets of New York City with a friend. Though born and raised in London, Heatherwick would often visit a great-aunt on the Upper East Side and crash on her sofa. That day, he recalls, “I remember walking around and there were these extraordinarily tall, beautiful women walking along. We just started following them and we ended up at a square.”

That plaza turned out to be Tompkins Square Park. And those beautiful women turned out to be participants in one of the inaugural editions of Wigstock, the legendary drag festival. “The energy of New York is something else,” Heatherwick marvels.

It’s that energy the English designer has been seeking to capture in his New York projects for the past two decades. In 2000, Heatherwick teamed up with patron and mentor Terence Conran on an installation of gleaming plywood ribbons inside Gustavino’s, a brasserie tucked beneath the Queensboro Bridge. Four years later, he returned for the design of Longchamp’s SoHo flagship, whose piece-de-resistance was a rippling steel staircase framed by balustrades that appeared to be made of molten glass. 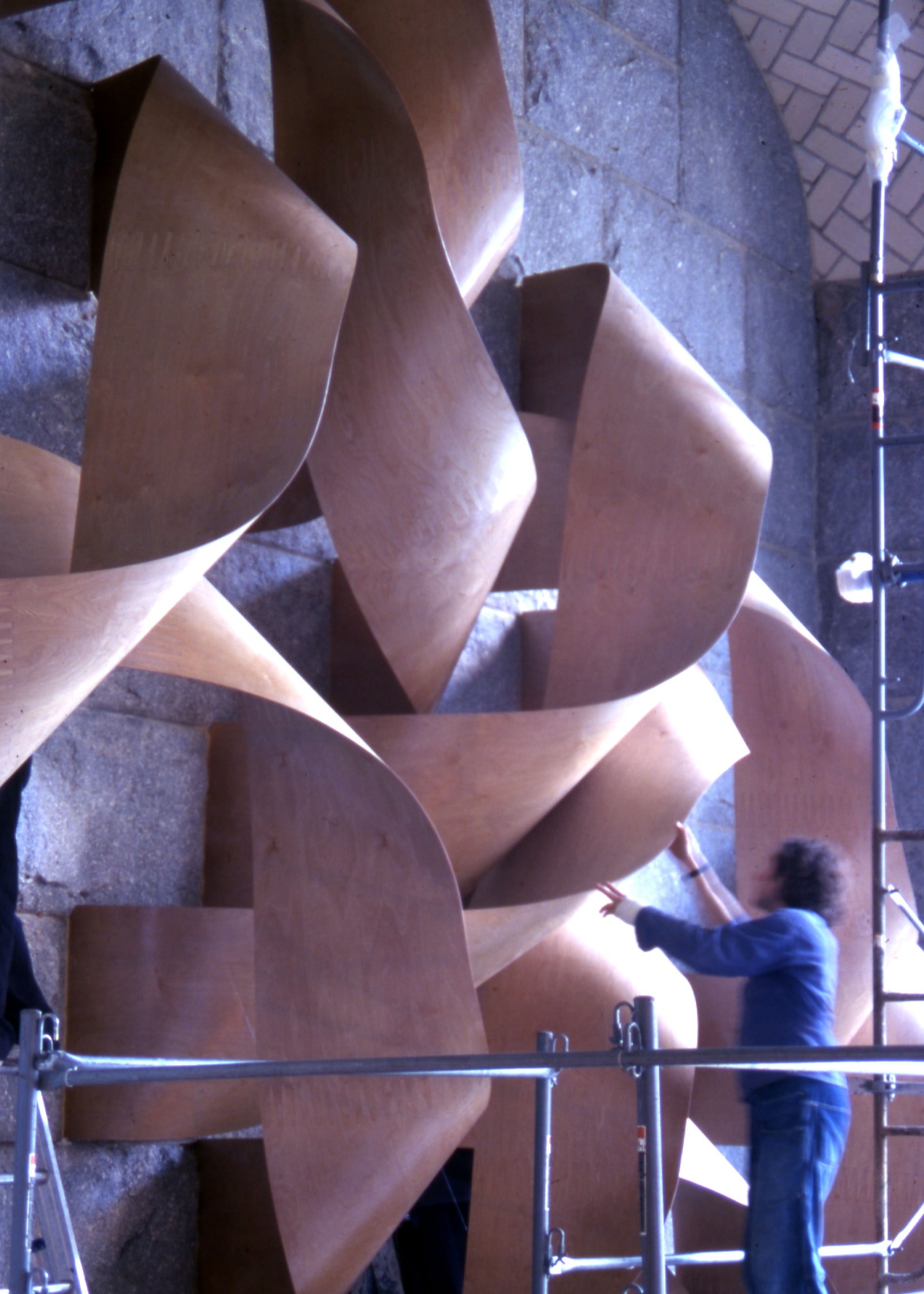 Heatherwick installing a plywood sculpture inside Gustavino’s in 2000.

Heatherwick Studio designed the interior of Longchamp’s Soho Flagship in 2004.

Heatherwick’s increasing renown took his firm (which now counts some 230 employees) away from Manhattan for the better part of a decade, but in the past few years three projects have sprouted up. The first, a dizzying Escher-like amalgam of stairways known as “Vessel,” opened in Hudson Yards last year. The second, for the same client, Related, is a J-shaped condo building (to be completed this fall) that hooks under the High Line. Its convex, faceted windows have inspired its name, Lantern House. And, finally, Pier 55, a verdant public park jutting out into the Hudson River, is set to open to the public in the spring of 2021.

As it happens, the three structures are spaced less than a mile apart and, in Google Maps, dot Manhattan’s West Side like stars in Orion’s belt. You might call it Planet Heatherwick. The designer, in his characteristic British fashion, calls it luck. “In the U.K., we have an expression: If you wait for a bus, three come along at the same time,” he says.

But the ride hasn’t necessarily been smooth. Pier 55 (which was renamed “Little Island” in November), backed by billionaire philanthropist Barry Diller and his wife, Diane von Furstenberg, has progressed in fits and starts after an ongoing series of lawsuits with the City Club of New York, a local nonprofit backed by real estate mogul Douglas Durst. Diller announced he was pulling the plug on the project in September 2017; weeks later, after Gov. Andrew Cuomo intervened, the project was back on. The park’s concrete columns—which, devoid of landscaping, have the appearance of bleached prehistoric bones—are just now rising out of the Hudson River.

Meanwhile, Vessel, Heatherwick’s most high-profile project in New York to date, was lampooned as a “$150 Million Stairway to Nowhere,” per the Times’ Ted Loos; as “an Instagram-ready tchotchke,” per New York’s Justin Davidson; and—perhaps most colorfully—“a mutant lovechild of New York’s two favorite snacks: the pretzel and the shawarma,” per the Guardian’s Oliver Wainwright. (At the sculpture’s dedication, New York mayor Bill de Blasio offered his own consolation to Heatherwick: “Do not be dismayed.”) And on February 1, just three days after this interview, a 19-year-old leapt to his death from the sculpture’s upper viewing decks. (“Heatherwick Studio is deeply saddened to hear this tragic news and sends deepest condolences to the family of the man who lost his life,” the firm told AD PRO in an email).