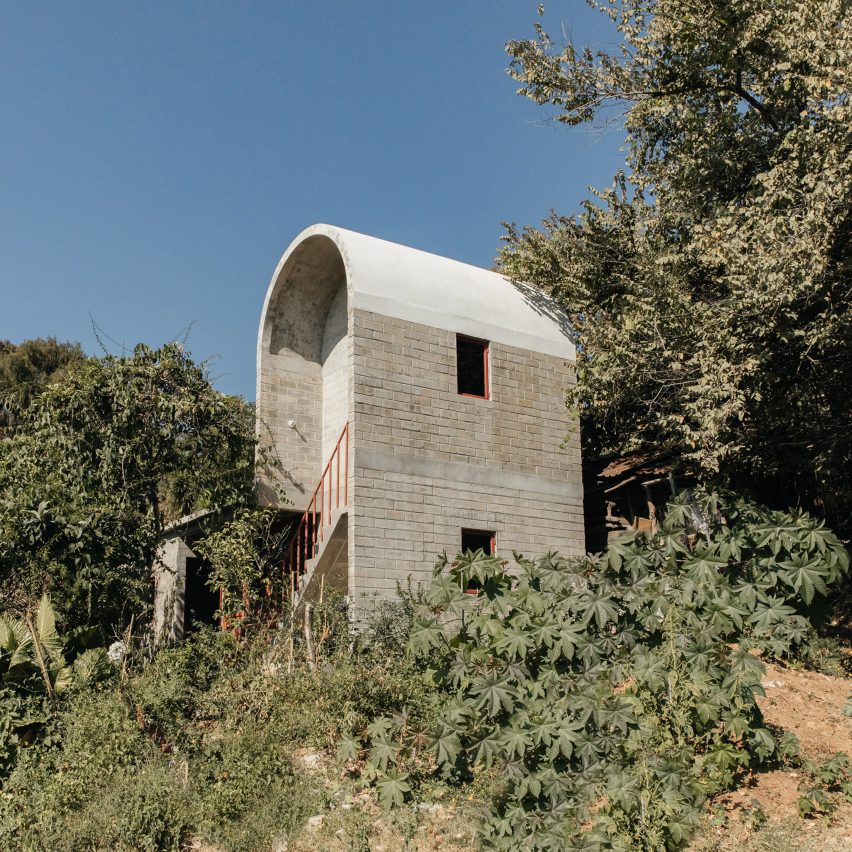 Architecture studio Naso has built a pale earthen brick house on a sloping site in rural Mexico to replace a property left devastated by the country’s deadly 2017 earthquake.

The residence provides the home for a family composed of an elderly couple, who have difficulty walking, and their two children who are over 40 years old.

The key aims of the project were to make the home easily accessible for the parents, create adequate spaces for socialising and privacy, and also find a way to allow the family to make an additional income.

“The family situation and their conditions were a starting point for the project,” Naso said.

In response, the firm designed the house which comprises two distinct volumes: a curved concrete roof structure placed above a single-storey rectangular unit.

The ground floor portion contains the kitchen, living and dining room and two bedrooms, including one for the parents so that they can live on one level.

The third bedroom is placed in a smaller volume on top, defined by the arched concrete roof.

“For this reason, having the third bedroom independent to the rest of the house allows us to think of an economic model that could support the family’s income through future rentals on distinct platforms or independent social contracts,” the studio added.

An exterior staircase means that it can be accessed separately from the main living areas, and could therefore be rented out to tourists visiting the area.

“This is how the house, in a very small area, has the possibility of accommodating different ways of life whilst offering a stable, social and independent future to a family that needs it,” the studio said.

“Formally, the presence of this room adds character to the project through a concrete vault that refers us to the surrounding mountains, while responding to the rainy climate of the area.”

Apart from the roof, all main components of the house – the walls, ceilings, floors and built-in counters – are constructed using compressed earth blocks manufactured on-site.

A set of sliding doors, painted red, front the exterior to allow the residents to open the house’s social areas to the outdoors. The same coloured red paint also details the window frames and stair railings.

“The nucleus or the public space of the house can be opened completely using sliding doors and this not only integrates the exterior into the house, but also will end up functioning as a large porch allowing its inhabitants to be immersed within the natural and social landscape that surrounds them,” the studio said.

The bricks are left exposed inside the house and complemented by simple wooden furnishings that include a dining table with several chairs, a small shelving unit in the kitchen and beds.

The deadly quake took place on 19 September 2017, with an epicentre in the state of Puebla. It killed over 350 people, with major destruction across the states of Puebla and Morelos, as well as the Greater Mexico City area, where over 40 buildings collapsed.

Other reconstruction projects built by Mexican architects in response to the natural disaster include a brick arcade in Jojutla and a temporary pavilion erected alongside a pond that was turned into community centre.

Photography is by Maureen M. Evans.