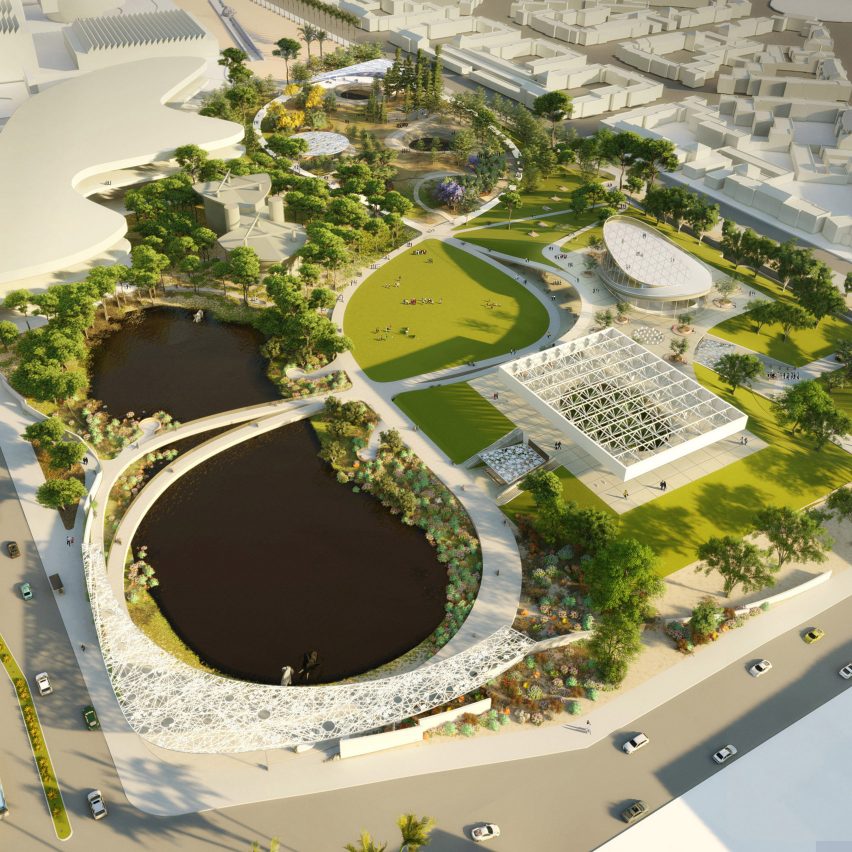 La Brea Tar Pits is a group of asphalt lakes, created from tar that seeped up from the ground over a period of thousands of years, trapping and preserving the animals that lived on site. The competition to update the 13-acre (five-hectare) campus was organised by the National History Museums of Los Angeles County (NHMLAC). It marks the historical property’s first update in over 40 years.

In the winning proposal, titled Loops and Lenses, the focus is a one-kilometre long pathway that curves through the public park joining three distinct themes of the site identified by the architects.

“There is truly no place in the world as magical as La Brea Tar Pits,” said Weiss Manfredi principals Marion Weiss and Michael Manfredi. “Our ‘Loops and Lenses’ concept creates new connections between the museum and the Park, between science and culture, and envisions the entire site as an unfolding place of discovery.” 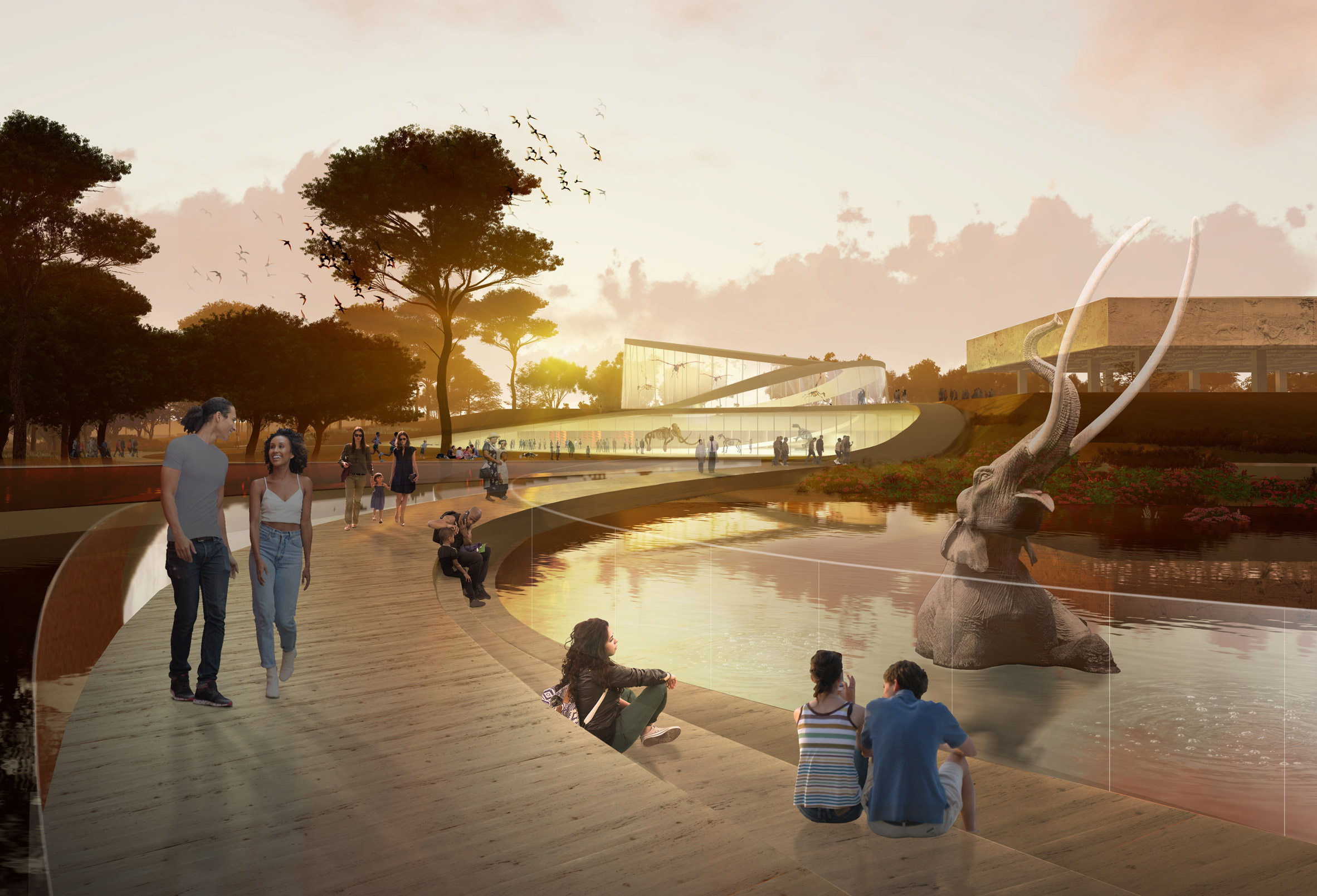 “The park areas connected by the loops capture three distinguishing themes: research and revelation, community and culture, and spectacle and urban fiction,” they added.

The first theme, Research and Revelation, is defined by several active excavation pits and the dozens of plant species inside the Pleistocene Garden, while the second theme, the Community and Culture loop, occupies the central lawn where the Page museum is located. The final theme called Spectacle and Urban comprises the edge of the park where the lake pits meet the city street.

“Lenses” are created by framed views along the route, which include dig activity, the museum and sculptures of animals found on the site.

“The lenses, as framed views throughout the park and museum, bring into focus the research and museum collection that contains over 3.5 million specimens,” said the architects.

Weiss Manfredi’s proposed design for the Page Museum, which houses a vast collection of paleontological findings, aims to preserve and enhance the existing building built by Frank Thornton and Willis Fagan in 1977. It doubles the size of the rooftop terrace creating space for hosting public events and adds a glass facade to reveal La Brea’s artefacts to the outside. 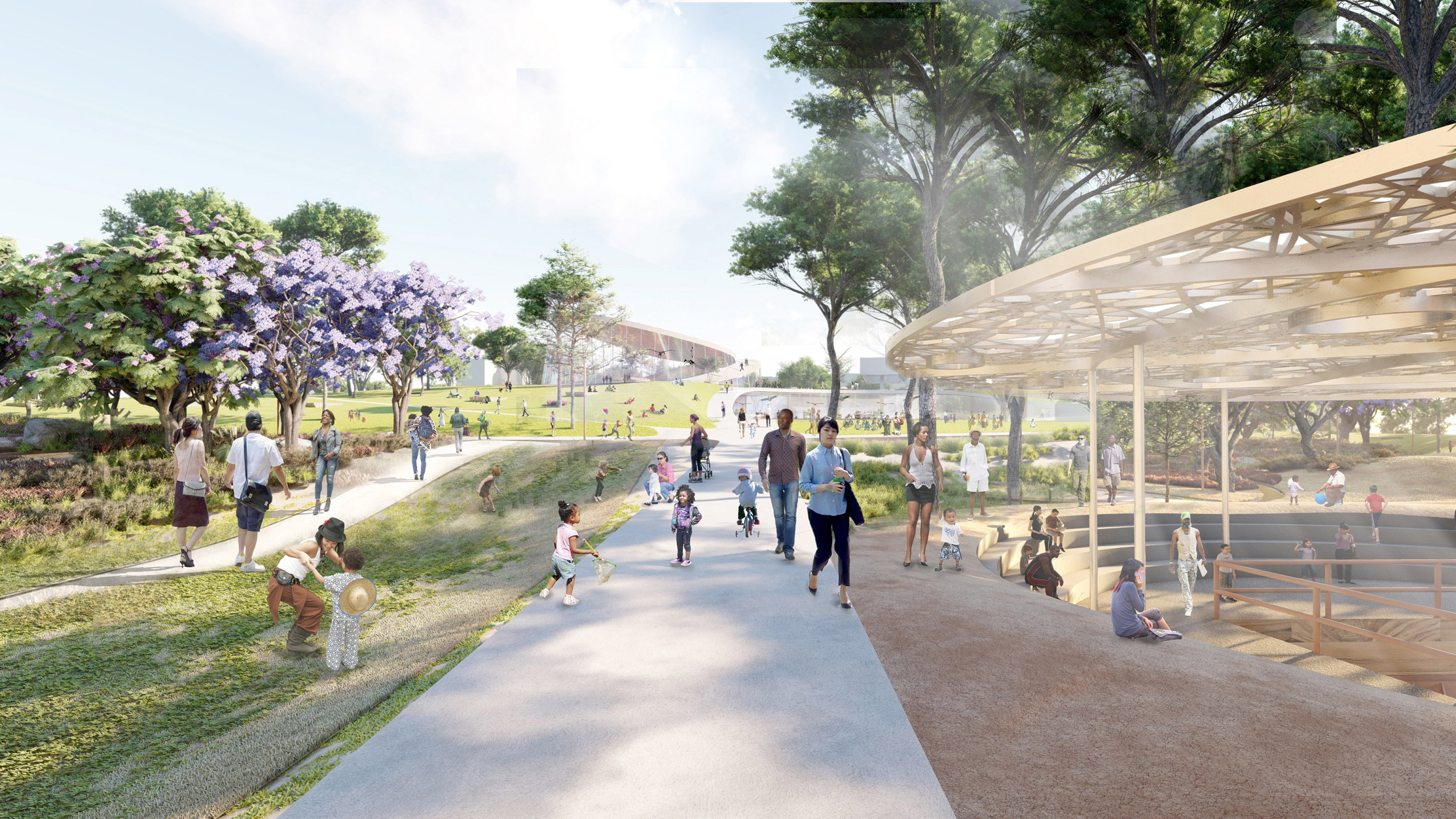 “The proposed design of the Page Museum expansion is rooted in a close analysis of the existing building, preserving and magnifying its unique strengths,” the studio said. “The beloved grass slope and terrace of the museum is doubled in size and made accessible in the expansion to provide more opportunities for recreation.” NHMLAC invited Dorte Mandrup, Diller Scofidio + Renfro and Weiss Manfredi to devise plans for the development in March this year, each studio’s initial concepts and proposals were presented to the public in August.

In Dorte Mandrup’s proposed plan an extension added to the museum featured a rooftop garden and open foyer, while Diller Scofidio + Renfro’s simple design involved inserting a massive glass volume inside the building to host the collection and placing a gridded network across the rest of the site.

Weiss Manfredi was founded by Marion Weiss and Michael Manfredi. In early 2019, the studio unveiled its masterplan for the renovation of Edward Durell Stone’s modernist US embassy in New Delhi, India.