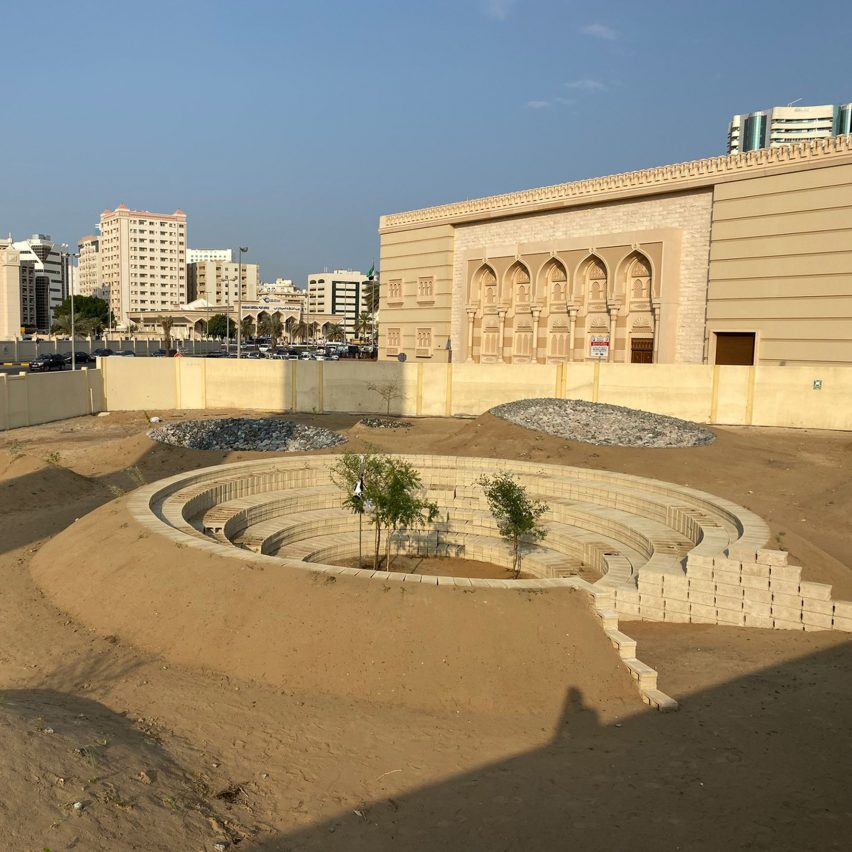 Architecture studio Cooking Sections and engineer AKII have created an experimental landscape in Sharjah to demonstrate how desert plants could be used as an alternative to water-hungry greenery in arid cities.

Named Becoming Xerophile, the installation was built alongside the Al-Qasimiyah School as part of the Sharjah Architecture Triennial in the city of Sharjah.

Cooking Sections and AKII created it to prove the concept of creating waterless, ornamental gardens in urban areas like the emirate of Sharjah and other Middle Eastern cities.

The installation consists of nine sand bowls of different shapes and sizes that were constructed using soil and rubble from the conversion of the school into the Sharjah Architecture Triennial‘s permanent headquarters.

Each of the bowls, which are planted with plants that can grow in very dry environments (called xerophile), are shaped so that they should not need to be watered.

“It consists of a new experimental landscape with nine microclimates to ‘water without water’ and to ‘water with stones’,” Fernández Pascual and Schwabe told Dezeen.

“It’s a technique that societies have developed over time in many places in the world to live in arid climates or places with no or scarce water sources.”

“By using earth mounds or dry stone constructions, these typologies control wind, humidity and heat variations to reduce water stress of the trees planted inside or make water condense naturally,” they continued.

The plants will grow and be monitored, until the next triennial takes place in 2022, to determine which of the nine microenvironments performs best, so that it can be replicated in other locations.

“The garden is equipped with a suite of sensors that measure the small microclimates generated by the earth-mound structures,” AKT II’s Adiam Sertzu explained.

“Through their materiality, shading, depth, and positioning, the structures optimise both air humidity and moisture drawn from the water table,” she continued.

“The condition of the plants inside and outside the earth mounds is monitored at 15-minute intervals and data will be gathered for the next three years.”

Cooking Sections and AKII said the experimental project was “urgent and extremely relevant” in the attempt to provide solutions to environmental issues in desert areas.

“While not all the experiments lead to perfect outcomes, they always provide valuable insights for future and more developed applications,” continued Sertzu.

“With this region facing environmental challenges in which high temperatures and infrequent precipitation contribute to water scarcity, pilot projects that embed adaptive research into design such as Becoming Xerophile are urgent and extremely relevant.”

The first Sharjah Architecture Triennial took place between 9 November 2019 and 8 February 2020, with the Al-Qasimiyah School being the main venue. It is one of several 1970s and 80s buildings in the emirate that have been restored by the triennial and partner organisation the Sharjah Art Foundation.

The post Zero-water garden created in Sharjah to show how desert plants can thrive in cities appeared first on Dezeen.