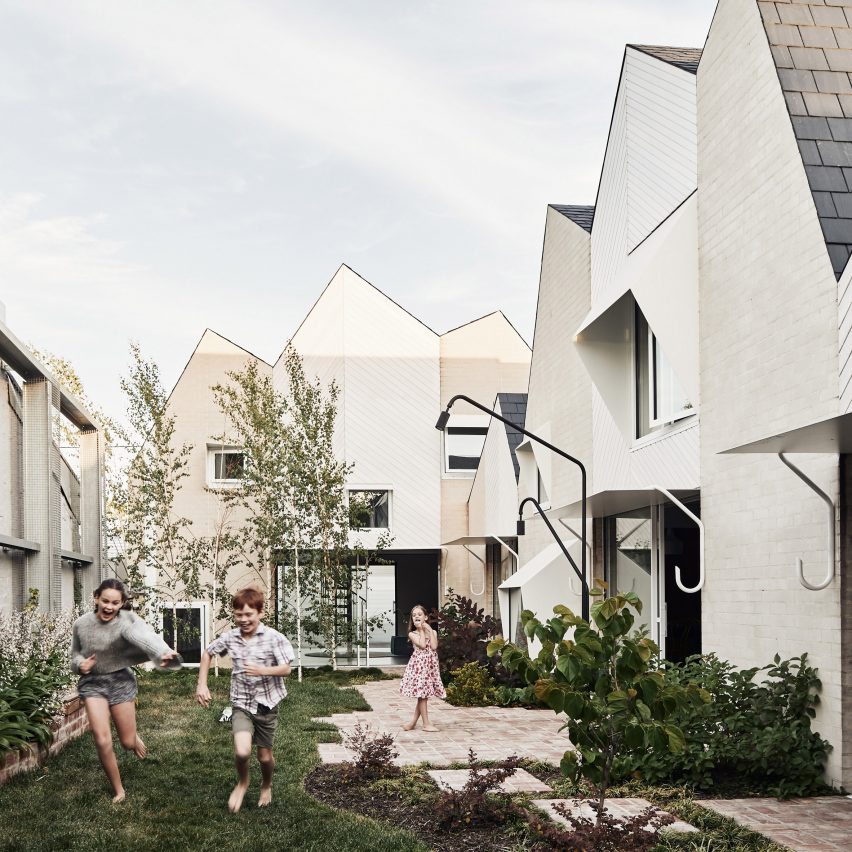 Two terraces in Melbourne have been joined together and given an extension with a zigzag roof by Austin Maynard Architects.

Called RaeRae House, the project retains the facades of the original elongated terraces due to heritage requirements.

After initially planning to refurbish their house, when the neglected neighbouring property came up for sale the owners decided to purchase it and merge its footprint into a single, large plot with a garden.

A glass corridor, sandwiched between the two existing frontages, leads through into the new L-shaped block.

The new buildings create a yard-like space as well as new facade to the street that runs along the site’s western edge.

“Initially it looks to be a fanciful design, an architectural mountain range, but at its core the house is responsive and strategic,” said the studio.

“The roof form is contextual, every rise and fall is tuned to minimise overshadowing and visual bulk, only truly apparent if it were studied from above.”

While the roofline and varied facade treatments give the impression of many individual buildings, the interior is in fact one large space.

These spaces can be subdivided or left open to one another using a series of sliding doors.

A secondary glazed corridor connects to the guest bedroom at the front of the home directly to the living area.

“Every part of the house can be a secluded space, closed off with hidden sliding doors, or opened up to be free flowing,” said the studio.

“The occupants can be engaged and connected or alone and private.”

In the living room, light is drawn in by an internal glazed courtyard that frames the brick wall of the existing terrace.

This light reached deeper into RaeRae House’s kitchen and dining room, each of which can open into the garden through a sliding door.

Above, a taller section of the block houses the master bedroom, accessed via a dark wood and black steel staircase.

The bedroom overlooks the garden thorough a large window surrounded by a metal canopy.

In the children’s block at the western end of the garden, a large play room sits at ground floor level.

A spiral metal staircase leads up to two bedrooms, connected by a small bridge that allows the space below to be overlooked.

White metal canopies and door surrounds extend into the garden.

Inside, white and wooden walls and ceilings that follow the steep pitch of the roofline create bright, open spaces.

Terrazzo flooring features in the common areas, and carpeted floors in the bedrooms.

Founded by Andrew Maynard in 2002, Austin Maynard Architects have completed numerous homes across Australia, including a shingle-clad extension to a bungalow in Canberra and a cylindrical, timber beach house in Victoria.

Photography is by Peter Bennetts.