The most expensive apartments across major Australian cities can be found in Sydney’s Barangaroo, where the median unit price is close to hitting the $3m mark, according to a study by Knight Frank.

The median price for an apartment in Barangaroo was $2.9m in the third quarter of 2019. It is one of the three suburbs in Sydney where median unit prices are over $2m.

Apartments in Point Piper and Miller Point are also amongst the costliest, with respective median prices of $2.8m and $2.4m.

In Melbourne, Brighton has the highest median unit price at $947,500.

Also read: Downsizing Is Out, Rightsizing Is In?

Of all the major cities for luxury apartments, Gold Coast was the most popular spot for homebuyers. The city had the highest portion of apartment sales between $3m and $5m from the third quarter of 2016 to 2019 at 26%. Brisbane followed with 22% and Sydney with 21%.

The table below shows the ten most expensive suburbs for apartments in Sydney, Melbourne, Brisbane, Perth, and Golden Coast: 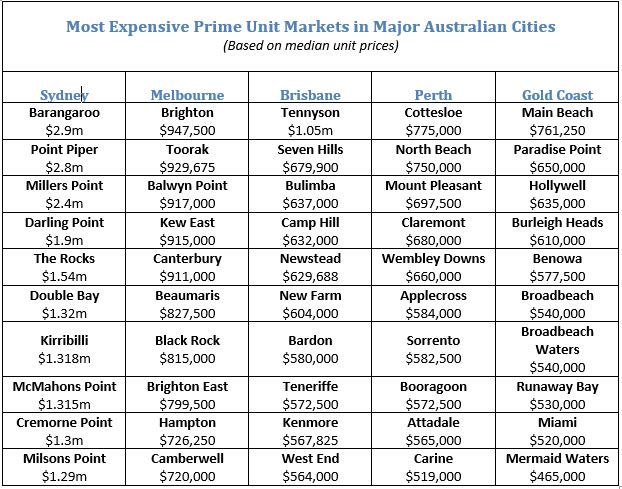