Location: Nicole’s 1960s split-level summer home, which she shares with her husband and three children, is located in Deal, New Jersey, about an hour’s drive from the family’s full-time residence in New York City. The 3,700-square-foot structure features a central atrium, with the kitchen situated at its rear right corner.

The before: “The original kitchen had walnut cabinetry, floral wallpaper, and a white porcelain floor, and it was so pretty,” Nicole says, “but it had become difficult to work in. The appliances were dated, the ovens were teeny, and the fridge hadn’t been replaced in 20 or 25 years. It was time for a change.”

The inspiration: The designer took cues from classic midcentury homes and case-study kitchens. The house’s history—and its own original midcentury palette—played a role in the redesign too. “I wanted to pay homage to what was there before, while giving it my own spin,” she explains. 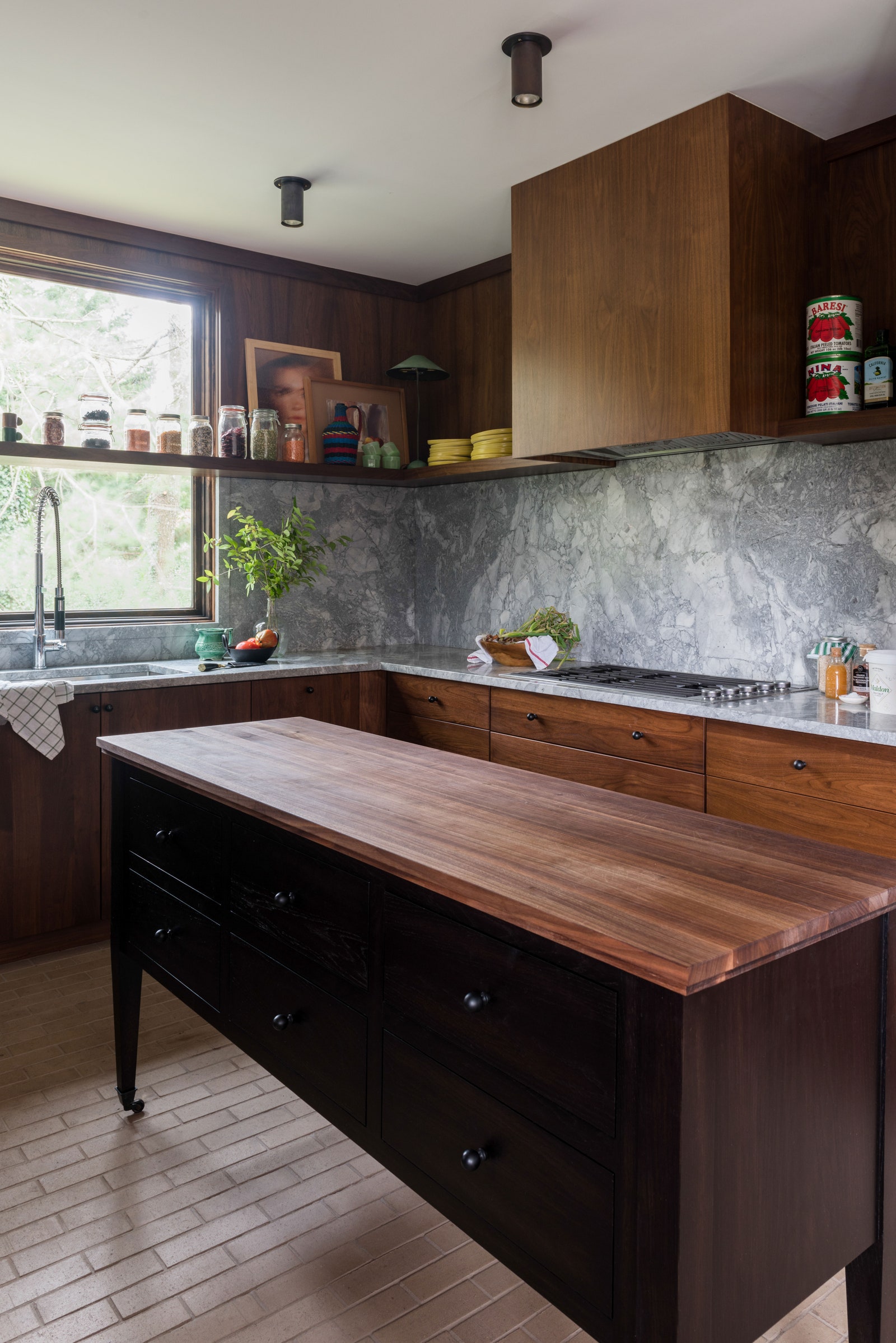 A 22-inch black oak island, complete with cutting-board top, functions as an additional work surface and a storage space for cooking tools and utensils.

Biggest splurge: Custom cabinetry was the kitchen’s most notable expense. In second place? The Dacor 42-inch refrigerator with 3D lighting, French doors, and a stainless-steel interior. “What really wooed me was that it makes two kinds of ice—regular and cocktail,” the designer says. “And the ice has its own drawer that separates it from the rest of the freezer. I don’t want chicken floating around near my ice, you know?”

Sneakiest save: Stone countertops aren’t typically considered a budget saver, but in Nicole’s case, a valued professional relationship helped keep costs low. “The stone people I work with gave me a great price, because I work with them all the time,” she says.

The best part: “It has to be the flyover shelf that spans the kitchen and goes across the window,” the designer says. “In the planning stage of the process, I thought about how I lived in the kitchen before and what kinds of things I kept on the counter at all times. Here, instead of keeping those things at counter level, I put them on that shelf, where I’m able to grab them as I need them. At first, people thought it was crazy, but I loved it. And I still love it.”

What I’d never do again: “I timed the process badly and the kitchen wasn’t done by the time we moved in for our first summer,” Nicole remembers. “So for the first few weeks we lived with a sort of dorm setup—we had a mini fridge, a toaster oven, an egg cooker. It would have all been fine if I had started in February and it was done by June. But alas!”