“I’m really lucky that Ashley is as tidy as me, and cares about her home surroundings,” says Derek, who loves having a colorful home: everything in its place, busy but organized. “My style is a little shabbier than hers, but I defer to her because she cares a little bit more.” Plus, they each get dibs on decorating different domains. Derek goes to town in his office and Ashley makes her mark in the living room and bedroom. 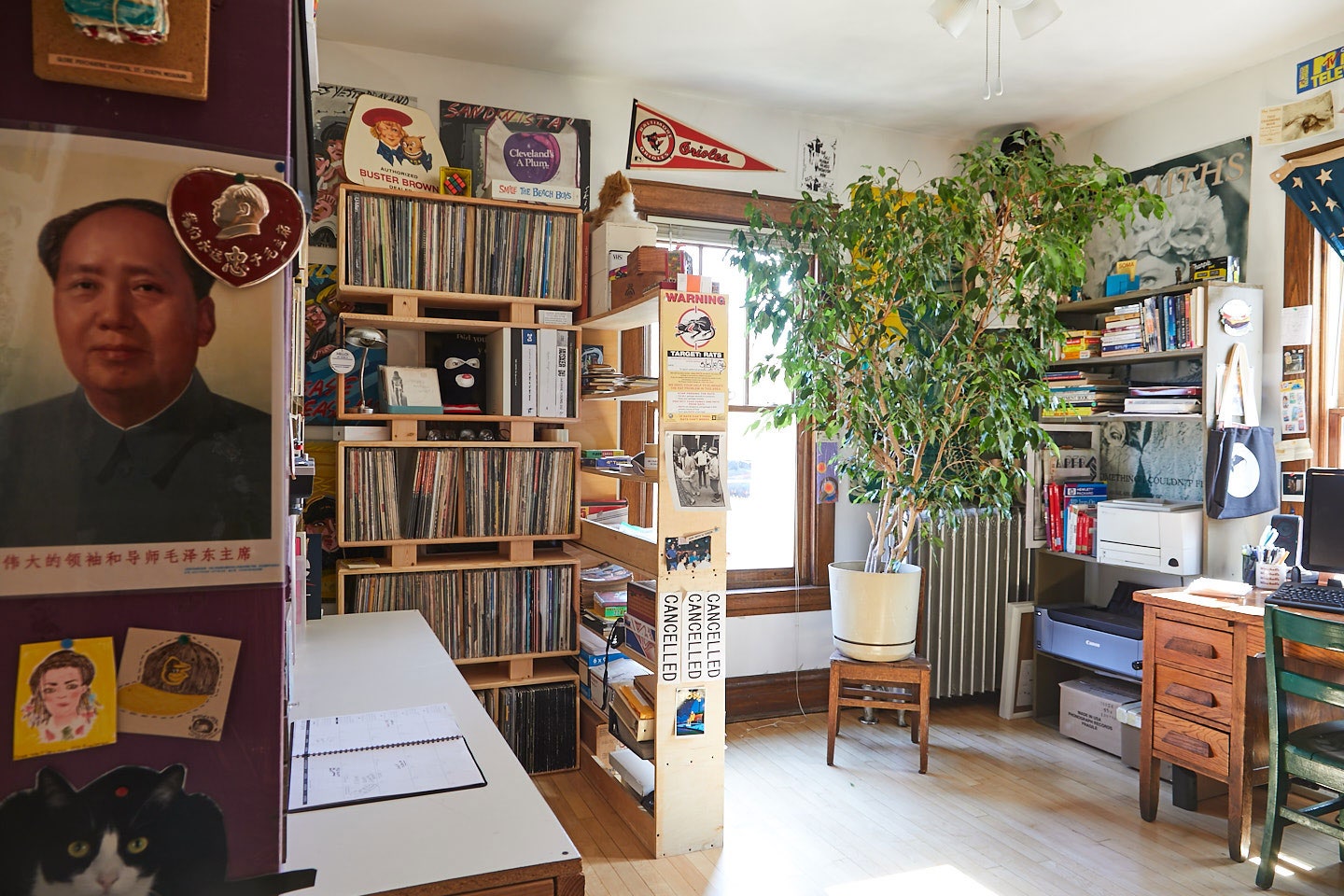 Derek’s office, at one end of the house, is where he is most of the time. “It’s where I get all of my work done and has two walls with windows,” he says. “It’s really comfortable and full of things that I love.”

“I have some things that are Ohio-related (where I’m from), and photos of Lora Logic and Christiane Vera Felscherinow,” says Derek, describing just a few of the art and objects around the home. “These are all things that I love or meant a lot to me growing up. We also have a lot of Ashley’s larger framed prints—I love them so much.”

The artwork filling the apartment is typically in flux. “We change it all the time, especially when our own work sells,” says Derek. “There’s a massive food painting in the kitchen, and the walls in the first hallway are mostly black-and-whites. There’s a closet where Ashley takes my stuff down and puts it in a pile. A framed photo of Studs Terkel hit the chopping block recently—it was quite sad.”

Derek’s great case for open kitchen shelving: “Not having to open a cupboard is one less thing to do in life.” Also, some favorite wares: the black Sasaki dishware and the Waechtersbach coffee mugs.

“I love the dining room/living room combo,” says Ashley. “When I’m not on shoots, I’m working at our dining room table. It gets the most amazing natural light.”

Beyond the amazing finds from trips and friends, Craigslist, and eBay, and the artwork that comes and goes, the space has needed little reconfiguration. “We changed some overhead lights. We painted the walls white—they were an odd puke green/gray when we moved in. Who even picks a color like that?” says Derek. “Otherwise it really hasn’t been rehabbed ever, aside from one of the bathrooms and the kitchen.” The kitchen cabinet doors coming down was a quick project for Derek and Ashley, who found them quite boring. “Plus I like to see all of the stuff, and not having to open a cupboard is one less thing to do in life.” Ashley adds, “Not only did we take off some cabinet doors, we also took off some doors! There used to be a swinging door between the kitchen and dining room and it felt in the way, so we took that off after about 48 hours of moving in.”

If you feel the smack of the wild decor (though we still find it quite cozy), it’s likely because Derek says he has always favored style over comfort, even to the dismay of guests. “Sometimes I’ll visit a friend’s house who has really comfortable chairs and realize, ‘Oh, a person can do that.’ But I have certain things that I love and care about,” he explains. “I’ve always decorated my house in my own paintings too, which I guess could seem tacky, but if I want a painting of Skylab, I can just make one.”