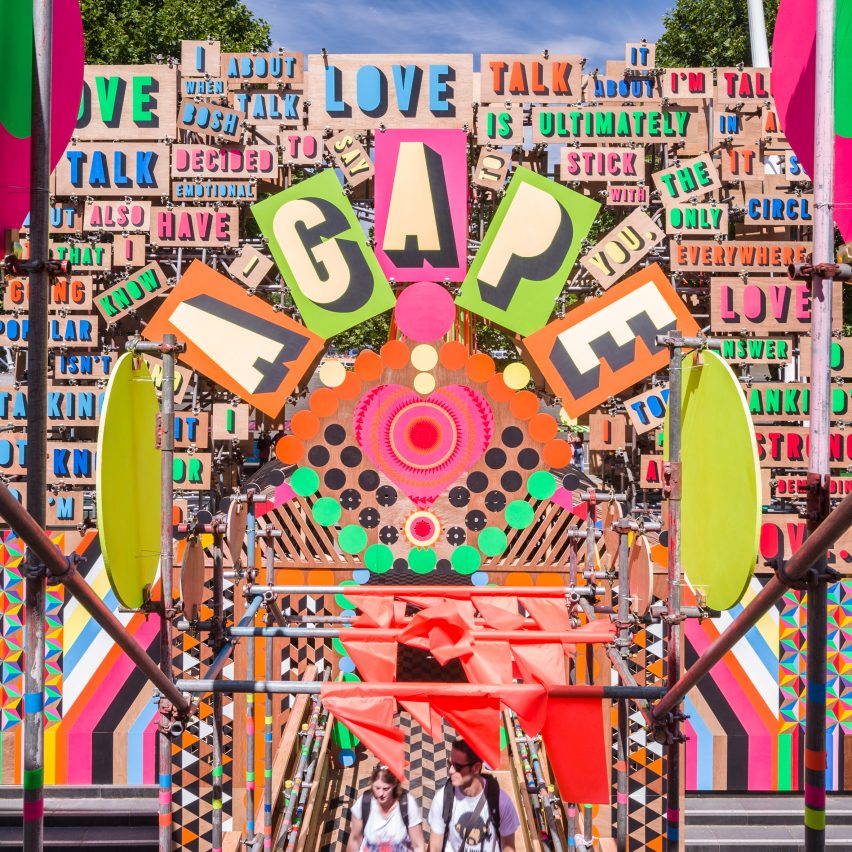 Myerscough credited the “power of Instagram” for alerting her to the issue and supporting her campaign to get images of the copied work removed and the theft acknowledged.

A representative of Sula Vineyards, which runs the festival, has offered the designer an “unequivocal apology”.

“This was an inadvertent oversight on our part and we take responsibility for it not happening in the future and ensuring that original artworks are put up and the artists get their due,” they said.

Artists should be paid to do new work not copies

The designer, who had just returned from India where she delivered a talk at a symposium for women in design, told Dezeen that she hopes Sulafest champion original work from Indian artists and designs in future.

“I want them to spend money on an artist to actually do new work,” Myerscough told Dezeeen.

“People from India who’ve been in contact with me said this is a big thing they want to change,” she added.

“That this [copying] is a thing that happens and it’s sort of okay, in people’s minds. But actually, as a young, burgeoning arts and design scene, they don’t want this to happen. They don’t want to take work from other people, you know, they want it to have integrity.”

An entrance gate at the two-day event, held by India’s largest winemaker Sula Vineyards, was an almost exact copy of Myerscough’s 2014 design for the Temple of Agape. Together with Luke Morgan, Myerscrough designed the architectural installation for the Festival of Love, a cultural at London’s Southbank Centre.

“There were too many similarities”

She was alerted to the copy when people sent her screenshots of pictures shared by Sulafest on Instagram pointing out the similarities.

Myerscough posted a side-by-side comparison of her Temple of Agape next to the picture from Sulafest on her own account.

“It was blatant,” said Myerscough. “You know, there were too many similarities.”

The comparison clearly shows how many elements are the same, including the brightly painted boards with words above a name spelled out over a logo in a halo effect, and patterns of colourful shapes either side.

Sulafest was held at the Sula Vineyards winery in Nashak, western India over the weekend of 1 and 2 February. Sula Vineyards is India’s largest winery, employing over 800 people and owned by Rajeev Suresh Samant.

A representative of Sula Vineyards reached out to Myerscough to apologise and initially offered to credit her work as an inspiration for the piece, but the designer refused out of principle.

“I said, look, I want you to take down every post and I don’t want my name connected to this work. Because there is also that thing that if somebody writes the words ‘inspired by’ that’s okay,” Myerscough said.

“I think that’s all right if you’re a dead artist, but not if you’re alive and doing things.”

Sula Vineyards have now removed all of the images of the plagiarised work and promised Myerscough to donate to an arts charity of her choice. Myerscough says she is happy with this positive ending to the story.

She has published parts of her email exchange in a follow-up post on Instagram, asking her followers to suggest good causes for the £2,000 donation promised by Sula Vineyards.

“India is such an amazing, vibrant place and the people are so fantastic,” said Myerscough.

“They want to do amazing things, you know, so they’re very passionate. So then they’re very hurt that there’s been [an incident] like this. That’s why there was this amazing support,” she added,

Photos of Temple of Agape, 2014, by Gareth Gardiner.