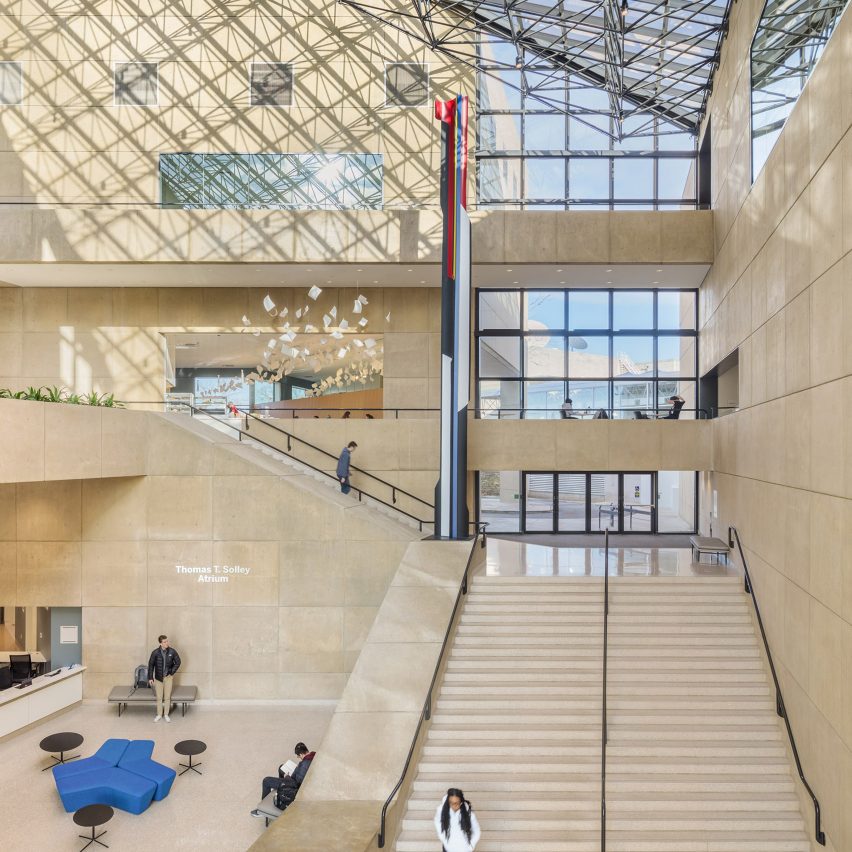 The Sidney and Lois Eskenazi Museum of Art is located at Indiana University’s campus in Bloomington, a city in the southern part of Indiana.

The museum occupies a 112,000-square-foot (10,405-square-metre) concrete building designed by the Pritzker Prize-winning architect, who died last year at the age of 102.

The buff-toned building, which opened in 1982, consists of two wings. One is trapezoidal in plan at the ground level, while the other is triangular. The wings are linked by a central atrium, which also is triangular.

A gridded glass ceiling brings natural light into the lofty atrium, which features a grand staircase and concrete surfaces.

The museum embarked on a renovation in order to expand its exhibition and study space, strengthen the connection between the two wings, and update various systems.

The renovation was overseen by the New York firm Ennead Architects under the leadership of founding partner Susan T Rodriguez, who has since established an eponymous practice.

The architect of record was Indianapolis firm Browning Day, and the university’s Capital Projects office also worked on the project.

“The building has a life of its own that informed every decision we made – large and small,” Rodriguez told Dezeen.

While the building was not enlarged, the team reconfigured the interior layout to make way for more gallery space and new study centres dedicated to conservation, education and curatorial studies, along with prints, drawings and photographs.

In one of the galleries, a glazed wall was inserted to allow visitors to peer into an adjacent conservation centre.

Another significant move was the addition of a skybridge in the atrium, which connects the two wings at the third storey. In the past, visitors would have to descend to a lower level to move between wings.

The team also created a new entrance to the museum on the north side of the building, which faces an arboretum, as well as a new cafe and gift shop.

The museum holds more than 45,000 items in its collection, ranging from ancient jewellery to paintings by Pablo Picasso and Jackson Pollock, and serves the academic community and the general public.

The extensive collection represents “nearly every art-producing culture throughout history”, according to the museum.

It added that the $30 million (£23.2 million) project is intended to “underscore the museum’s position as one of the preeminent teaching museums in the country for generations to come”.

During his seven-decade-long career, Chinese-American architect Pei designed many award-winning projects around the world such as the glass-and-steel pyramid at the Musée du Louvre in Paris, the Museum of Islamic Art in Doha and Mesa Lab in Colorado.

He also received a number prestigious accolades including the Pritzker Prize in 1983, the AIA Gold Medal in 1979, RIBA’s Royal Gold Medal for architecture in 2010.

Photography is by Brad Feinknopf/OTTO and Shanti Knight.