Introducing this new opportunity to a vanguard of creatives is not always easy. Designers are often looking for something specific for a particular environment, artists are searching for mediums to translate ideas, and architects are most interested in form. Judson stresses the need to explain the material itself and coach people into taking advantage of its attributes. Fused glass is something to work with, not employ. After all, the end result is something that is intended to be looked through, not at. “You’re working with transmitted light—that’s the key. It’s not reflected light, like with a painting in a museum,” Judson explains. “I think that’s why it has this spiritual connotation. It feels so ethereal in a way. You’re manipulating something that is coming from outside of it. It’s kind of a superpower that glass has.”

Some have been quick to harness that superpower. Artist James Jean has been working with Judson Studios and used his background as an illustrator to “push the limits of what can be done, cleverly playing with dimensionality,” says Judson. The two are currently in the process of developing a 3D glass structure that can be walked into. Designer Kelly Wearstler has been working with the studios on her numerous hotel projects and furniture creations. While she doesn’t typically use fused glass, Judson says her take on the possibilities of glass in contemporary design are particularly exciting. Amir Fallah created arresting portraits that utilized both fused glass and traditional stained glass. Notably, Sarah Cain created a luminous and stunning 10-by-150 foot fused glass wall for the San Francisco International Airport. According to Judson, “Sarah had no interest in fusing when she first started the project. But the more time she spent in the studio, the more she realized we were able to create these large pieces of color transition that she didn’t think were possible.” Now all of San Francisco’s weary travelers can be awash in a luminous and colorful glow. 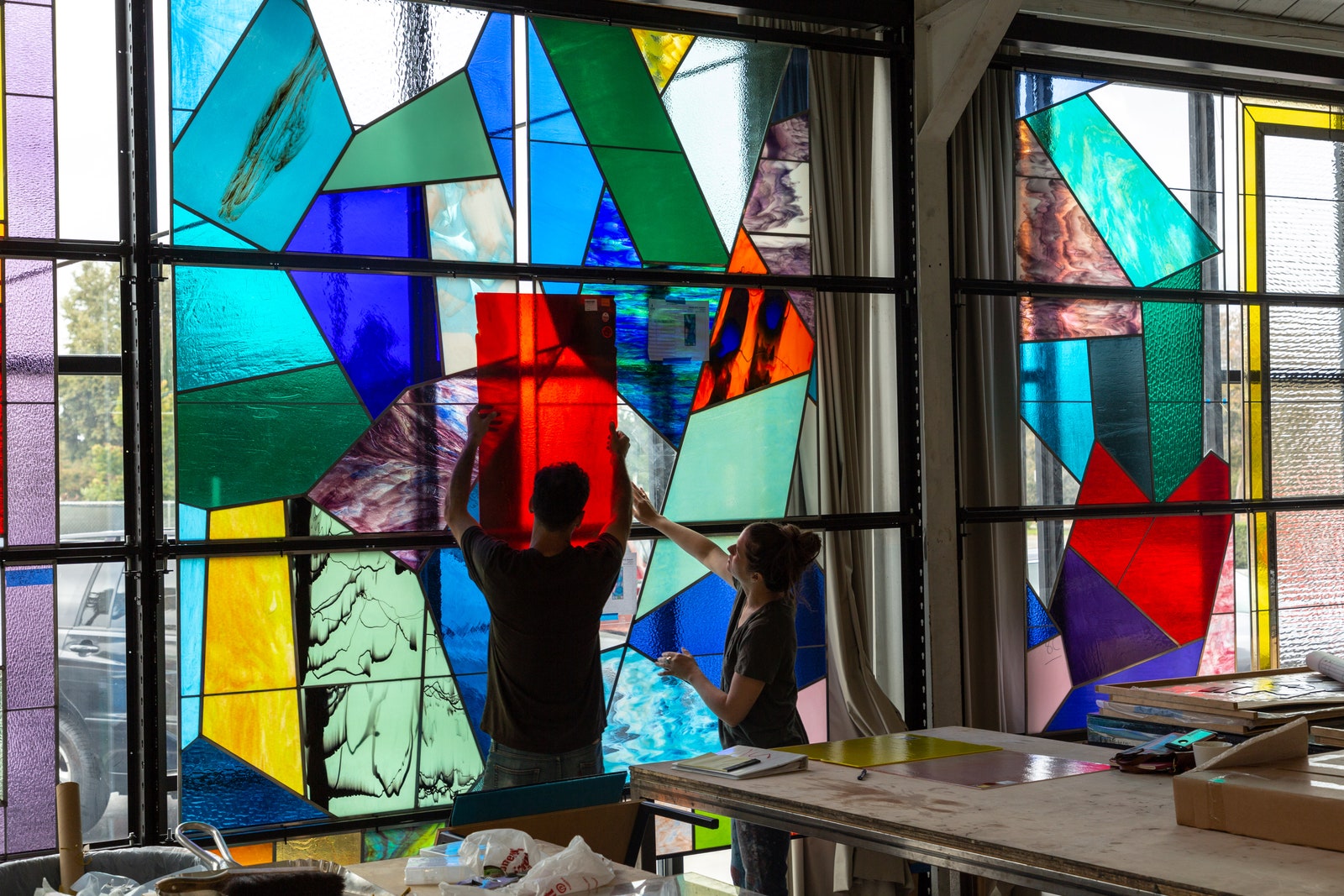 It’s this shared experience of stained glass that Judson sees as the true creative future of the craft. “Public art is one of the things we felt immediately and I think will continue to evolve and become more sophisticated over time,” he says. He feels that glass can provide a calming, soothing, and authentic respite from an increasingly digital world. Judson sees glass playing a role in his work with artists to create built environments that conjure a sense of awe, sensibility, and structure. His perspective nods back to that mention of glass having a superpower of being spiritual and ethereal. “In essence, I think the glass of the future will do the same thing that ancient cathedrals did for people. It doesn’t have to be in a religious setting, but it can create the same kind of feeling.”