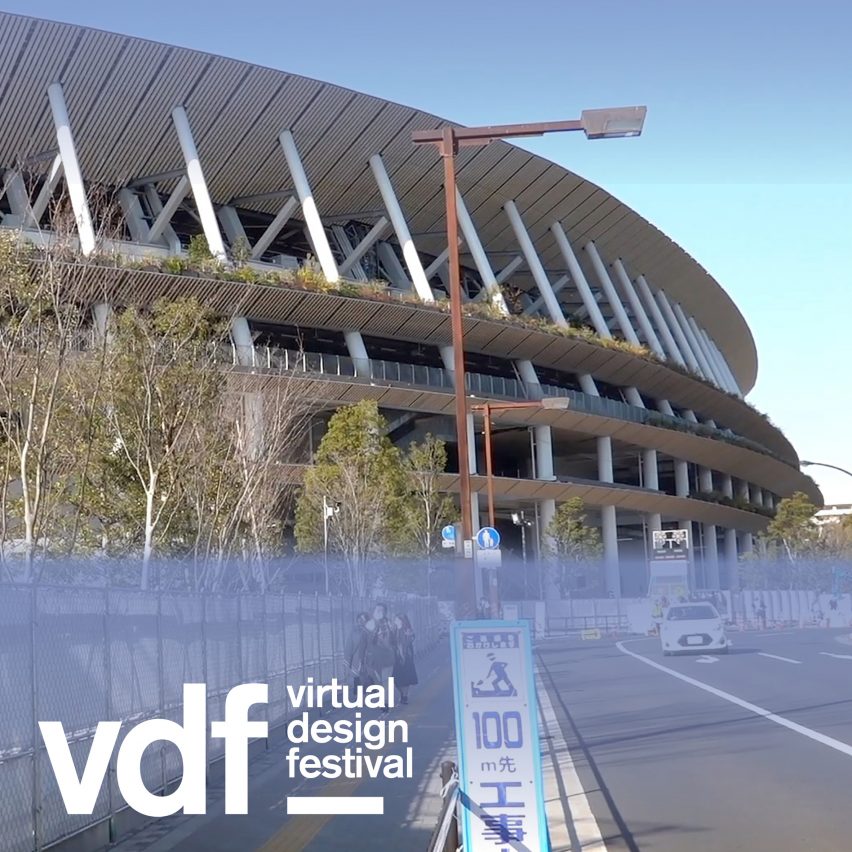 “Here behind me is the new Olympic Stadium designed by Kengo Kuma,” says van der Linden. “The project was rather controversial, as the international competition was initially won by Zaha Hadid.”

Officially called Japan National Stadium, the building was completed earlier this year in time for this summer’s Tokyo 2020 Olympics. However, the games have since been postponed until next year due to coronavirus.

The project was mired in controversy in its early days, with Zaha Hadid winning a competition to design the stadium in 2012. However, three years later, the project was scrapped amid opposition from leading Japanese architects and concerns over costs.

“Due to budget constraints, some changes to the design were requested by the Japanese government,” says van der Linden, who made the short video for his One Minute Architecture channel on YouTube.

“Even after the changes, the redesign by Hadid was still estimated at ¥300 billion – three times the cost of the London Olympic Stadium.”

“At the same time, in 2012, a group of Japanese architects led by Fumihiko Maki and also Edward Suzuki were very vocal against Hadid’s redesign,” he adds.

“A limited competition was won by Kengo Kuma, with Taisei as the main contractor, at a cost of ¥157 billion. Construction was completed in 36 months.”

Kuma’s design features slatted-wood cladding on the exterior and three levels of walkways lined with planters.

“Quite a bit of wood used”

“The conceptual basis for the design is what Kuma called a living tree,” says van der Linden. “As you can see, many plants have been integrated into the facade design and there’s also quite a bit of wood used.”

Kuma’s use of wood echoes the approach at his SunnyHills project in Tokyo, which also adapts a traditional Japanese technique and which Van der Linden blogs about in another short movie.

“This wood lattice structure is a reference to traditional Japanese architecture and will, according to the architects, add to building structural integrity,” van der Linden explains.

“Cross ventilation and fans should help cool the visitors and athletes during the hot and humid summers of Tokyo.”

Van der Linden, founder of Tokyo-based Van Der Architects, points out that “the number 47 comes back in the design many times.”

“The height of the building is 47.4 metres. 47,000 trees have been planted around the venue. And wood used in the construction was sourced from the 47 prefectures of Japan.”

“The design is quite simple, and definitely not iconic,” van der Linden concludes. “But I personally like it very much, especially once the vegetation is blooming and the stadium will look like a large planter. We definitely need more living trees in Tokyo.”

Virtual Design Festival has teamed up with van der Linden to present a selection of his best short architecture movies.

“Even after 28 years, I found Tokyo endlessly fascinating, and I enjoy making videos of its architecture, and its rather mysterious urbanity,” he said in a specially created video introducing the collaboration.

Virtual Design Festival, the world’s first digital design festival, runs from 15 April to 30 June 2020. It is a platform that will bring the architecture and design world together to celebrate the culture and commerce of our industry, and explore how it can adapt and respond to extraordinary circumstances.

VDF will host a rolling programme of online talks, lectures, movies, product launches and more, complementing and supporting fairs and festivals around the world that have had to be postponed or cancelled and it will provide a platform for design businesses, so they can, in turn, support their supply chains.