There are many things about New York City’s Metropolitan Transit Authority (MTA) that are worth complaining about, but its new subway car design may not be one of them. Last week the MTA provided a first glimpse of the new R211 cars designed by Kawasaki Rail Car Inc., which was awarded a $1.4 billion contract for the project in 2018. 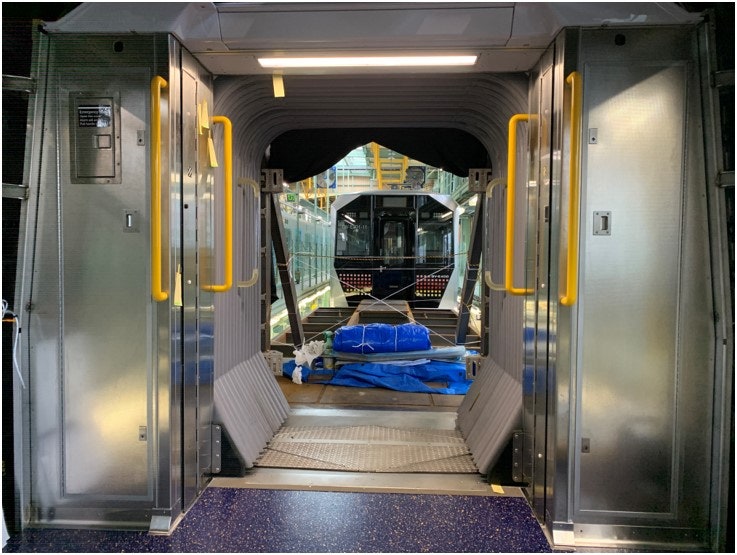 The new cars are revolutionary for their open-gangway design: Rather than being separated by doors, the cars will flow into one another, creating more square footage in which to fit passengers. (The same plastic seats will remain in each subway car.) While this design has been used in many other metro systems around the world (including those in London, Toronto, Paris, Tokyo, Amsterdam, and Buenos Aires), the R221 cars mark the first time it’s being implemented in New York.

The R211 interiors under construction.

Beyond the new gangway system, the cars will have doors that are eight inches wider than their predecessors—according to the MTA, simulations show that this could reduce the amount of time each train spends in the station waiting for passengers to enter and exit by up to 32%. The cars will also have new technology for a better and safer user experience: full-color digital displays for announcements and ads, security cameras, and light-up alerts announcing the opening of the doors. The exteriors of the cars have blue fronts, sides with blue stripes and gold accents, and LED headlights for energy efficiency.

The exterior of the R211 subway car.

The pilot program for the R211 cars, which will comprise 30 vehicles, is scheduled to start testing by the end of the year. If all goes according to plan, Kawasaki will build 505 more cars to be rolled out over the next two years, with the cars entering service on the B-Division system (that is, the lettered subway lines) as well as the Staten Island Railway. But remember, this is the New York City subway…so we might be held in the station due to train traffic ahead of us for quite some time. We’re sure the MTA apologizes for any inconvenience.