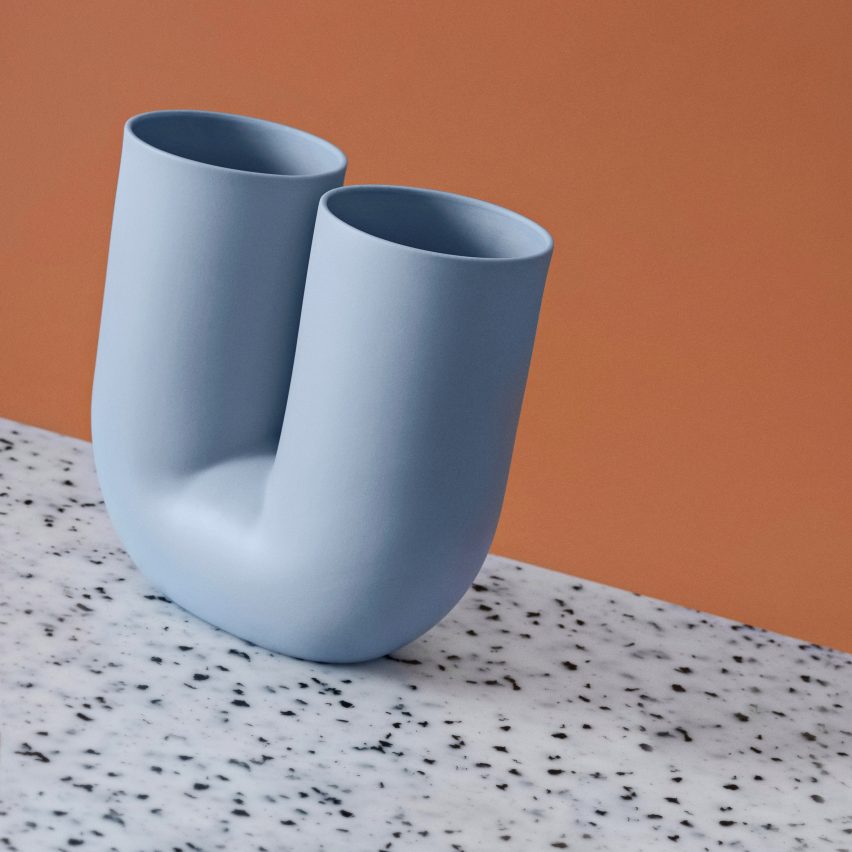 Rotterdam-based Earnest Studio has designed a pair of products for Danish design brand Muuto – a lamp featuring individual lighting units fixed to a metal pole by magnets and a vase with a kinked profile.

The lamp and vase are the first products created for the brand by designer Rachel Griffin’s studio.

The Post Floor Lamp is a modular lighting-solution comprising a base and two, round lighting units that the user can fix to a central stem in any position.

The lamps can be angled as required and are individually dimmable, so the direction and strength of the light can be tailored to suit the space.

The two lighting units are plugged into a central power hub so they can both be turned on or off at the same time. Each lamp also has its own integrated touch-operated switch for controlling the light.

The cords are fitted with magnetic cable drops for attaching the cable to the central rod. An additional lighting unit can also be added by plugging it into the power hub and positioning it on the rod.

Earnest Studio also developed a wall-mounted version of the product, which applies the same simple and graphic aesthetic to units that can be magnetically attached to a wall-mounted metal bracket.

“The Post Floor and Wall Lamp came from the idea of exploring the flexibility of a magnetic joint, giving the user the freedom to position and dim the lamp’s lighting units according to individual needs,” Griffin explained.

“Designed with a sculptural expression, simple lines and refined finish, the Post Floor and Wall Lamps represent a new perspective through their graphic character and forward thinking functionality.”

The second product created by Earnest Studio for Muuto is the Kink Vase. Griffin developed a new take on the traditional accessory, using digital design technologies to create its playful shape.

“My starting point for the Kink Vase was an exploration of how new forms could be created through the digital manipulation of simple shapes,” said the designer.

“The design combines this appreciation of modern technology with traditional ceramic craft, resulting in a piece that is both contemporary and sculptural,” she continued.

“The graphic and playful appearance of the Kink Vase – combined with its double opening, which suggests a new way to arrange flowers – infuses its surroundings with joy.”

The distorted tubular form was made possible by computer modelling software and is produced in porcelain using a traditional process.

The design’s double-ended form gives it a sculptural presence in a room when not in use, and the user can choose to use one or both ends for floral arrangements.

The vase is available in sand and light blue colourways, with a glazed inner surface providing a contrast to the smooth, matte exterior.

The two new products were unveiled by Muuto at the Design Post showroom during the recent IMM Cologne trade fair.

American-born Griffin founded Earnest Studio in 2012 after studying graphic design in the USA and graduating from the Man & Living programme at Design Academy Eindhoven.

The multidisciplinary studio works across a broad range of projects, designing everything from brand identities to furniture and accessories. Griffin previously collaborated with designer Emilie Pallard on a collection of furniture made using standard construction materials.

Muuto works with many international designers to develop products and furniture that represent a contemporary take on Scandinavian design traditions.

The brand’s recent products include a collection of cocoon-like pendant lights designed by Benjamin Hubert’s studio Layer, and an aluminium lamp by Tom Chung that projects light from both ends.