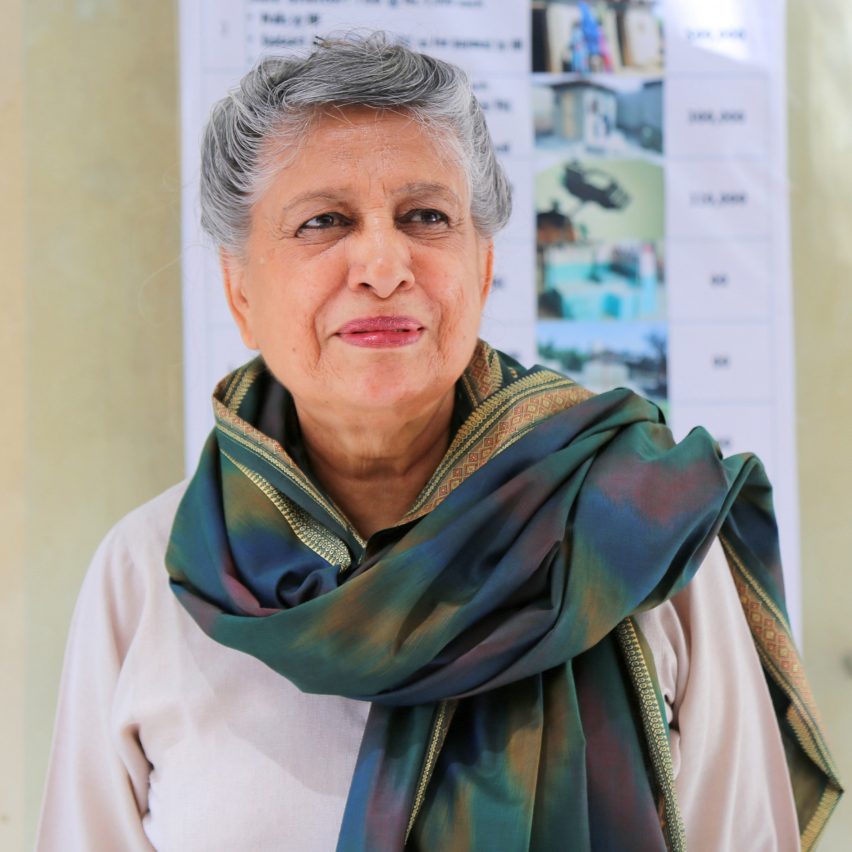 Yasmeen Lari, Pakistan’s first female architect, has been awarded the Jane Drew Prize 2020 for raising the profile of women in architecture.

Aged 79, Lari has continued to dedicate her life to architecture since closing her practice in 2000, advising UNESCO and building homes for tens of thousands of people affected by floods and earthquakes in her home country.

“I am touched and humbled to be included among the galaxy of architects who have received this prize,” Lari said.

Previous winners of the award, which is named for English architect and modernist pioneer Jane Drew, include Odile Decq, Denise Scott Brown, and Amanda Levete.

The Jane Drew Award is part of the Architects’ Journal (AJ) and The Architectural Review‘s W awards series, formally known as the Women in Architecture awards.

Born in Dera Ghazi Khan, Pakistan, in 1941, Lari grew up in Lahore until she left to visit London at the age of 15. Initially there for a family holiday, she ended up staying and continuing her education in England.

She tried to enrol in architecture school, after her interest was piqued by seeing her father work on development projects in his role with the Indian Civil Service.

“I went for an interview to get admission…and they [asked], ‘Well, can you draw, young lady?’ And I said I couldn’t,” Lari told Jazbah Magazine. “So they [suggested], ‘You better go learn to draw first at an art school.'”

Lari duly studied art for two years, before getting her degree at the Oxford College of Technology, now the Oxford Brookes University School of Architecture.

After graduating in 1964, aged 23, she returned to Karachi in Pakistan and opened her practice Lari Associates, becoming the country’s first female architect.

As well as fighting to be respected as a woman in an industry dominated by men, she pioneered her philosophy of “barefoot social architecture” that helped communities in socially and environmentally sustainable ways.

She designed terraces that were open to the sky, so the women who moved here from their previous flood-prone houses would have outdoor space for their chickens and children.

Her self-financing Lines Area Resettlement programme in 1980 was an ambitious project to rehouse 13,000 people in self-built homes without displacing them from where they lived and worked.

Lari also designed landmark buildings in Pakistan, such as the Finance and Trade Centre and the Pakistan State Oil House in Karachi.

Together with her husband, Suhail Zaheer Lari, she founded her humanitarian and conservation project the Heritage Foundation of Pakistan.

Closed her practice to focus on humanitarian work

She closed her practice in 2000, and devoted her energy to using her experience in building with bamboo and mud to help when a series of man-made and natural disasters devastated the region.

When the Pakistani Armed Forces were fighting Al-Qaeda and the Taliban in Khyber Pakhtunkhwa in 2007, Lari built community kitchens in refugee camps for those displaced by the conflict.

Using bamboo, a fast-growing and sustainable material, she helped create 40,000 homes over four years, after floods hit the area in 2010. The structures withstood further floods in 2012 and 2013.

When earthquakes shook the country in 2013 and 2015, Lari designed earthquake-resistant shelters with cross-braced bamboo frames.

Designed a life-saving stove for women

“I often tell my colleagues, ‘let us not treat disaster-affected households as destitute, needing handouts’,” Lari told Reuters in 2014. “Rather let us give them due respect and treat them as we would a corporate-sector client.”

In 2018 she won the World Habitat award with her design for a fuel-efficient chulah, or stove, which emits none of the toxic smoke that was blighting Pakistani women’s health.

Lari will be speaking at the W Lunch at Battersea Arts Centre in London on Friday 6 March.