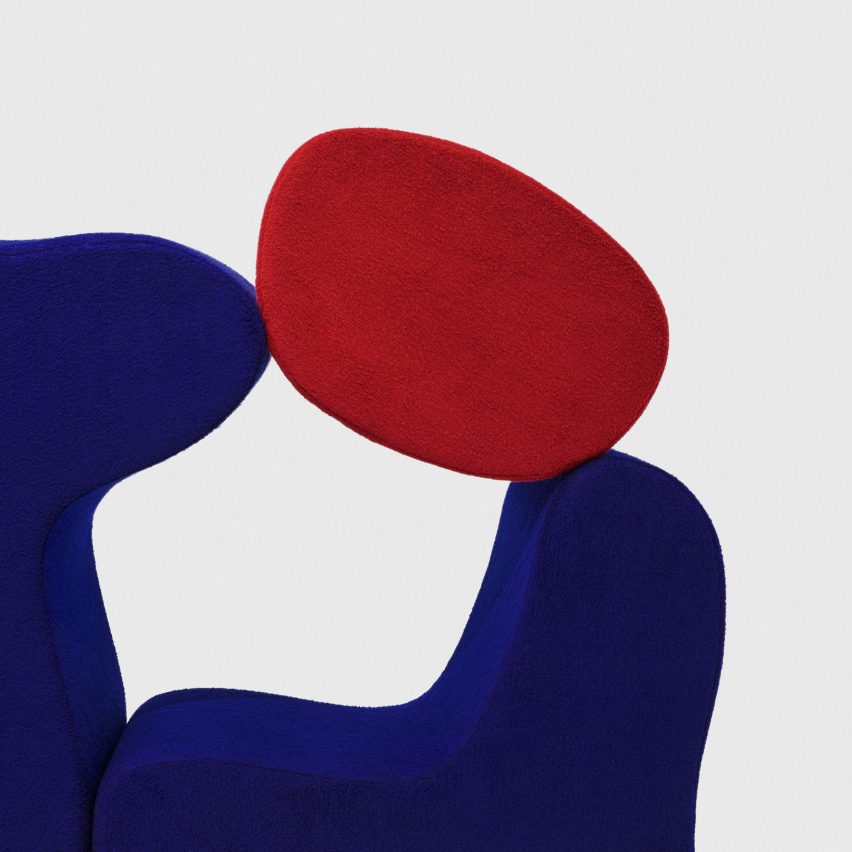 For both fabrics, created as part of ongoing collaboration with Kvadrat, Simons aimed to create unusual textures from natural materials including linen, wool and viscose.

Helia, which is made mainly from new wool, with added acrylic, viscose and nylon, has been constructed to resemble the texture and structure of astrakhan – a type of fur taken from fetal or newborn lambs.

The fabric, a bouclé textile, is a woven interpretation of the fur and has an organic, structured design. Its yarn-dyed fibres give Helia a melange character.

The soft, voluminous Silas fabric, made from new wool and nylon, is created through a complex finishing process.

The fabric has a velvet-like texture that is repeatedly unravelled and beaten, which makes it swell and resume its shape, and then steam-treated.

With both Helia and Silas Simons has tried to explore the limits of upholstery fabrics and reproduce the variety found in fashion textiles.

“For this year’s collection, I was very interested in experimenting with woven versions of some of the traditional materials and techniques used in haute couture such as furs and knits,” said Simons.

“The result is two sensuous textiles with heavily textured yet extremely soft surfaces.”

As well as the two upholstery fabrics, three cushions in Silas have been added to the line, and Simons also added a colour update to his Sunniva 3 fabric.

Simons first worked with Kvadrat in 2014, and has continued to bring his signature blending of colours and materials to the Danish brand’s textiles.

In 2005 he became artistic director of Jil Sander and in January of this year, it was announced that he will work alongside Miuccia Prada as co-creative director of Prada.

Kvadrat, which was founded in 1968, has a history of working with designers to create innovative textiles and products.

The company recently launched its Maya and Jaali fabrics, designed by London studio Doshi Levien, and worked with Ronan and Erwan Bouroullec on a roller blind that can reduce a building’s energy consumption.