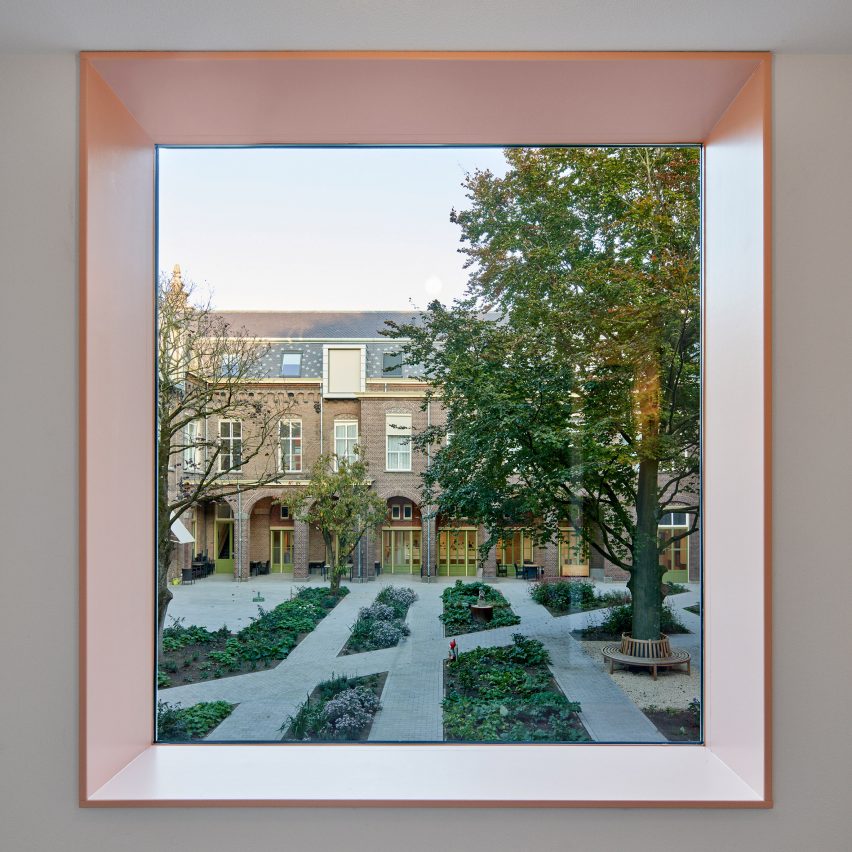 Dutch studio Shift Architecture Urbanism has extended the Oude Dijk monastery in Tilburg with a brick extension with a nursing home and apartments for its residents, the Sisters of Charity.

The four-storey block extends from the south-eastern edge of the historic monastery, which date back to the mid-19th century,

This extension provides 24 care home apartments and 36 apartments for those with limited care needs.

Continuing the cloister typology of the original monastery the extension is design to compliment the existing structure and gardens.

“[It’s] informed by the rich historical context without becoming pastiche or retro,” said the studio.

“The shape prioritises the pure form of the courts and gardens over the primary form of the buildings. As a consequence, the buildings are not to be recognised as solitary volumes, but rather as walls that define a variety of distinctive outside spaces.”

The form of the nursing home and the elongated apartment block has created two new courtyard spaces.

One courtyard is open to the public. Sitting alongside the new apartment block, it doubles as an entrance.

The other courtyard, surrounded by the nursing home and enclosed by the new apartments, provides a private space for the Sisters.

A glazed ground-floor arcade creates a connection to the courtyard while allowing for climate control and security.

The western edge of the apartment block looks out onto Oude Dijk’s extensive garden at the centre of the whole complex, which features a small pool of water and is planted with trees and hedgerows.

“Recessed windows and loggias make the building not claim the garden, while the apartments still open up generously towards the green,” said Shift Architecture Urbanism.

In contrast, the city-facing facade references the proportions of the original monastery with thinner windows.

A main circulation corridor runs from the entrance square through the building, cutting between the apartments and the central courtyard.

External paving continues from the exterior into this internal corridor to bring continuity, contrasting with the exposed block work of the apartment walls.

The apartments were required to be mobile-bed-accessible, and so have been divided into three bays.

Each one has a bedroom and study sitting either side of a central living, kitchen and dining area.

A second phase of the development, which will add a further two apartment blocks to the Oude Dijk complex, is due to begin construction in spring 2020.

Other recent projects by the practice include the renovation of a derelict four-storey home in Rotterdam, replacing its back wall with glazing to create two light-filled apartments.

Photography is by René de Wit unless stated.