When it’s finally safe to release ourselves from social distancing and entertain with friends again, Tony and Martel Hale would like to have you over. In fact, the Emmy winners (she for makeup, and he for Veep) designed their three-bedroom Los Angeles home, where they live with their daughter, Loy, to be just the type of welcoming respite where their loved ones can walk in, kick off their shoes, watch an episode of RuPaul’s Drag Race, and maybe even stay the night. (There’s a guest house with a Murphy bed for that.)

And should you be the lucky recipient of a dinner party invitation at the Hales’, the Southern pair (she’s from Anniston, Alabama; he grew up in Tallahassee, Florida) probably serve up cheese straws and a one-pan rosemary-lemon chicken, a Southern Living recipe that’s their go-to. “We love to have people visit,” Tony says. “When someone walks into the house, we want them to feel joy. There’s a cozy, sit-by-the-fire, have-a-glass-of-wine vibe to the house.” Who among us couldn’t use a little of that right now? 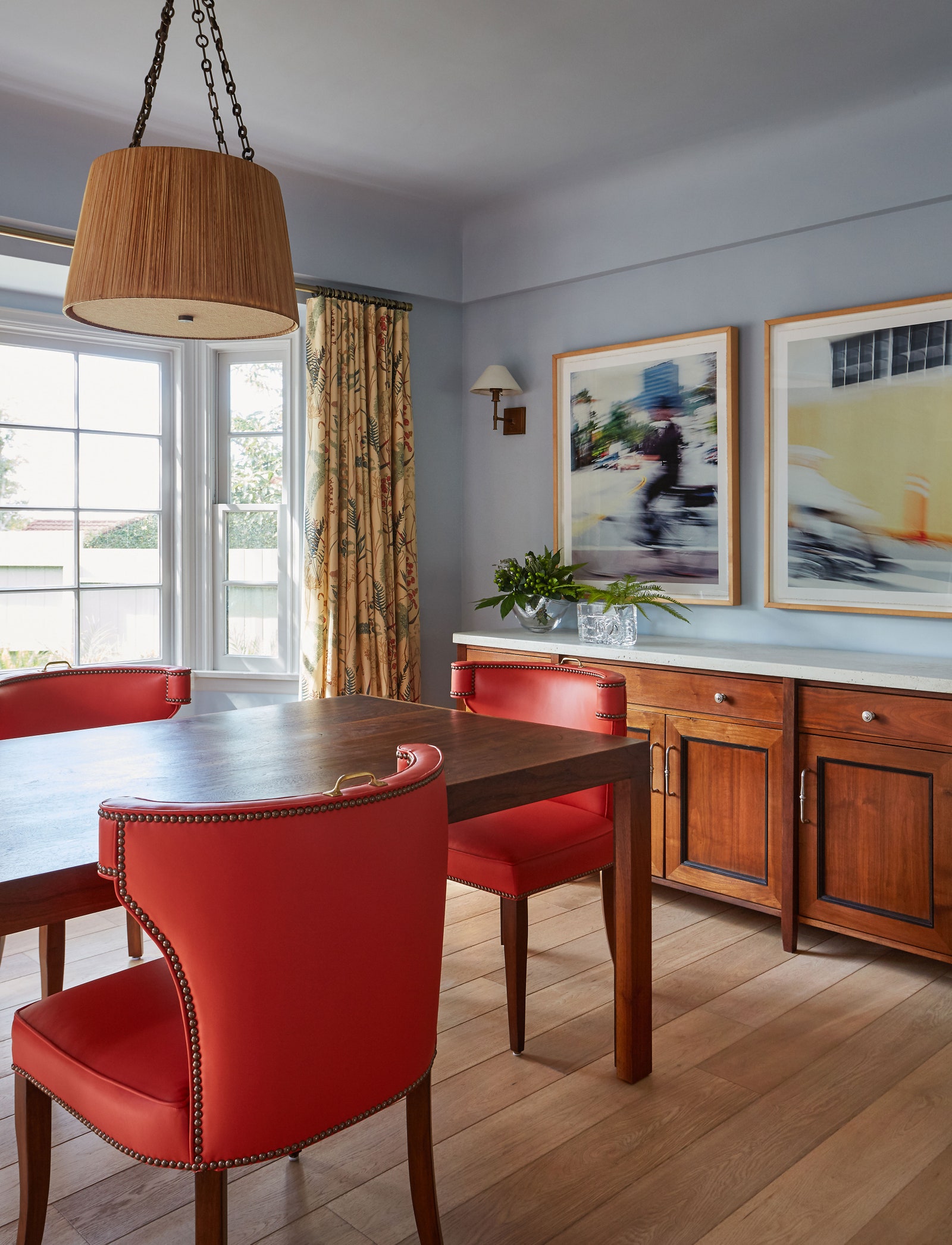 Inspired by Diana Vreeland’s New York City apartment, Martel wanted something bright, but she wasn’t sure where. Martin & Brockett designer Jason Martin convinced her to use a fiery orange shade on grommeted dining chairs that he designed (and fittingly named The Hale). A Broad Beach raffia pendant hangs above the table, also by Martin & Brockett. Jen Mayo, a production coordinator on Arrested Development, photographed the artwork above the buffet.

When the couple moved into the Studio City ranch house five years ago, they called upon friend and Martin & Brockett interior designer Jason Martin, who had worked on their first house in Griffith Park, to give it a homey feel. “I wanted it pretty, and I wanted it Southern; a bit modern, and a bit traditional,” says Martel in her Alabama drawl. And a relaxed feel was key: “I remember saying I don’t want to sacrifice comfort for something just being cool or looking good,” Tony says.

So Martin filled the space and its guest house with tufted furniture, cozy monochromatic shades, and the kind of showers you’d want to spend all day in. The couple’s master bedroom is a prime example of their comfort-based philosophy: You could literally roll from the bed onto a tufted sofa, then right onto cozy overstuffed ottomans, never once encountering a hard surface.

In Tony and Martel Hale’s L.A. home, designer Jason Martin designed the kitchen for the home’s previous owners, but the Hales fell in love with its modern farmhouse feel. It was also the perfect place for their ABC Carpet & Home wooden table, a wedding gift from Martel’s mother. “We always sit around this table and catch up when people come in,” Tony says.

The couple’s homey atmosphere is also thanks to plenty of personal touches, like the Saturday Night Live costume sketches lining a wall in the kitchen—Martel salvaged them from the trash when she was on the makeup team there in the late ’90s to early ’00s. Their kitchen table was a wedding present from Martel’s mother. In the living room, the couple hung photographs by a production coordinator from Arrested Development. Julia Louis-Dreyfus, Tony’s Veep costar, told them about the artist whose work they now display in their powder room. But most importantly, the pair and their daughter use every room of the house. “There’s a puzzle on our dining room table as we speak,” Martel says.

As Martin can attest (he and his husband have been hanging out with the Hales on an almost-weekly basis for the last 16 years) their unpretentious love of home and hosting isn’t just a line. Even during my interview with the duo and in subsequent emails, Tony and Martel invited me to come over the next time I’m in L.A., a request I’m holding them to when this is all over. “That’s what’s so exciting about having a home with a design aspect to it,” Tony says. “It’s a real gift to anybody who comes into the house. It’s a service to them. I just want you to have just a real, restful time here.”