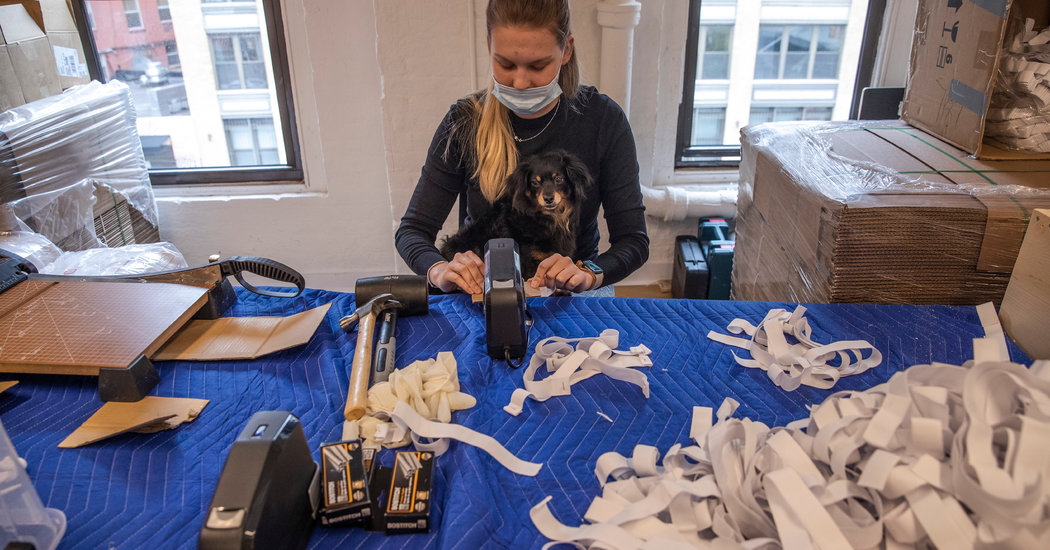 This spring, a refurbished loft with white-painted brick walls and a chef’s kitchen was supposed to be part of the scene. It would serve as a high-end showroom and co-working space by day and an exclusive event venue by night.

That did not happen.

Instead, the 3,100-square-foot space, on the fourth floor of a building called Little Flatiron because of its resemblance to the 23rd Street landmark, reinvented itself as a factory for personal protective equipment, or P.P.E.

“For us, the monumental task has been, how do you get a factory up and running within a week?” said Sam Payrovi, chief executive of Consortium, the company in charge of converting the loft into a factory, implementing safe working conditions and hiring people to churn out medical gear as soon as possible.

The initiative, coordinated by the city’s Economic Development Corporation, is one of many the agency has undertaken to produce face shields, surgical gowns and, soon, test kits for Covid-19.

Designer cushioned chairs have been stacked and pushed to the side and blankets draped over dining tables where newly hired workers, making $15 an hour, are assembling face shields. Made of clear, flexible plastic, the shields can be worn over surgical masks, providing additional protection.

And while the loft at the intersection of 14th Street, Ninth Avenue and Hudson Street may be an unlikely setting for an assembly-line operation reminiscent of those from World War II, equally surprising is the building’s colorful history.

The 1848 red-brick building has housed sex clubs and starred in movies including “Fatal Attraction”(Glenn Close’s character had an apartment here).

Earlier, Little Flatiron contained factory space — in 1892, a shoe manufacturer employed 175 workers on the premises — so the face-shield operation has returned the building to its roots, if only temporarily.

To hire factory workers quickly, Consortium enlisted the Meatpacking Business Improvement District, the Fashion Institute of Technology and Women in Hospitality United, among other organizations, to get the word out. Its goal was to recruit 90 people to work in staggered shifts, as part of a seven-day-a-week operation.

An online application asked candidates to check off boxes consenting to statements like: “I am willing and able to perform manual labor for an 8-hr work day.”

Over 250 people applied. The first hire was an F.I.T. student, Vladislava Bulatnikova, 23, who emigrated from Russia six years ago and is wrapping up a degree in advertising and marketing communications.

She had already lined up an internship at Consortium for after graduation but jumped at the chance to join the assembly line. “It’s an amazing opportunity to help the community,” Ms. Bulatnikova said.

On the job, she and other workers must observe social distancing, and then some. Upon arrival, they stash personal belongings, have their temperatures taken, slather on hand sanitizer, and don masks and gloves.

They must sterilize all newly assembled shields, bag them, box them and put the boxes on pallets that are then shrink-wrapped. Workers carry the pallets down to trucks owned by the fashion discount chain Century 21, which is volunteering them for the cause.

Irene Justiniani, who was born and raised in Mexico and has spent most of her adult life working in New York’s hospitality industry, now reports here daily.

Before the pandemic, she was the beverage manager at the nearby see-and-be-seen French bistro, Pastis. She and others were first furloughed, then laid off.

“In the beginning, we had hope our jobs would be waiting for us,” she said. “Now we don’t know what will happen.”

As the designated factory cook, Ms. Justiniani prepares lunch for workers so they don’t have to leave the building during their break.

Although Ms. Justiniani said she is not earning as much as she did in her previous job, she is grateful to be working. “It definitely helps,” she said. “It helps a lot.”

The conversion of Little Flatiron into a factory is part of a broader, $50 million effort by the city to support local manufacturing and employ people who have recently been laid off, while supplying desperately needed protective gear to medical workers, said James Patchett, president of the Economic Development Corporation.

“We had every ability to make things ourselves and be less dependent on a global supply chain that had gotten more complicated,” Mr. Patchett said, referring to how cities are competing with states, the federal government and other countries for resources and equipment.

Face-shield factories had been piloted at three locations in New York City before Little Flatiron, including at the Brooklyn Navy Yard, which has its own production history. During World War II, men and women built battleships for the Navy there. The corporation now has eight facilities up and running in Manhattan, Brooklyn and the Bronx.

So far, 368,000 shields have been produced and delivered to the city’s Department of Health and Mental Hygiene, which distributes them to hospitals. With Little Flatiron now in business, the corporation expects 500,000 shields to be made this week.

Consortium, a tech platform that connects makers of custom fashion accessories with retail stores, has a network of manufacturers and suppliers that has enabled the company to get the face-shield undertaking up and running.

Novolex in Hartsville, S.C., donated giant rolls of sheet plastic, weighing 1,500 pounds each, for the shields. Consortium ordered foam sheeting — to be sliced into strips and attached to the shields to protect foreheads — from the Foam Factory, a company based in Michigan, and also obtained nearly 400,000 feet of elastic for straps at a factory in China.

The team is still working out kinks in the production process.

Measuring and cutting the elastic was taking too long, so someone on the assembly line with experience building theater sets helped devise a contraption to expedite the process. And no one expected glue to require so much drying time.

But Nathalie Paiva, Consortium’s chief retail officer, stood on the factory floor on Friday afternoon, marveling at what had been accomplished so far.

“We’re beginning to box shields,” she said. “We’re not at full capacity yet, but it’s going. It’s cranking.”